Close
Trending News
HomeSportBarcelona may be a shambles, but make no mistake – Zidane’s understated genius is the key to Real Madrid’s title success

Barcelona may be a shambles, but make no mistake – Zidane’s understated genius is the key to Real Madrid’s title success

Barcelona may be a shambles, but make no mistake – Zidane’s understated genius is the key to Real Madrid’s title success

Real Madrid sealed a first La Liga title in three years by beating Villarreal on Thursday night, a triumph which serves as yet more testament to the subtle brilliance of manager Zinedine Zidane.

A strike in each half from French forward Karim Benzema handed Real a 2-1 victory against Villarreal at the Estadio Alfredo Di Stefano and the La Liga title along with it, although they would have been crowned champions whatever the result as second-placed Barcelona slumped to defeat at home to 10-man Osasuna.

It was Real’s 10th victory in a row since the restart from the Covid-19 break, as Zidane’s team have overturned a two-point deficit from Barcelona to seal a 34th La Liga title in their long and storied history, but only their third in the past 12 seasons.

For Zidane, it is a second La Liga crown as manager to add to the one he picked up in the 2016-17 season, and accompanies the famous ‘threepeat’ of Champions League titles won between 2016 and 2018.

The Frenchman with the Midas touch has achieved this latest feat with what is far from a vintage Real team; in sealing the title, Real have largely ground out results rather than glittered (while rival fans will somewhat bitterly point to a spate of VAR penalty decisions going their way during the run-in).

Barcelona may have been a mess for the past few months (more on which below), but Real have capitalized and been clinical when it mattered most.

Yet again for Los Blancos, this has been a triumph born of the understated genius of the Frenchman they have at the helm.

The Covid-19 hiatus meant that once football restarted, the game in Spain and elsewhere would be faced with a unique situation of matches coming thick and fast, testing squad rotation and depth to the limit for the majority of teams.

Zidane has risen to that unique challenge, tweaking and tinkering to perfect effect. As Spanish outlet AS has noted, the Frenchman has alternated formation as required between 4-3-3, 4-4-2 and 4-2-3-1, fitting in the personnel available and managing game-time in a congested fixture list.

The players have responded ideally. Many feared we had seen the best of the 34-year-old Luka Modric, but he has been integral to Real’s latest title success, starting 22 of the 31 La Liga games he was available for this campaign, including Thursday’s game against Villarreal, and chipping in with three goals and eight assists.

Sergio Ramos has continued to be his wily, imperious best at the back, scoring at the other end by converting penalty after penalty (20 in a row, in fact), as well as free-kicks the type of which Lionel Messi would be proud.

Karim Benzema, so long in the shadow of Cristiano Ronaldo, has 21 goals and eight assists in 36 appearances this campaign – a haul which would arguably be higher if he had not shared spot-kick duties with Ramos.

In goal, Thibaut Courtois has kept 18 clean sheets in 34 La Liga games, finally establishing himself as the Belgian wall which Real thought they had bought from Chelsea back in the summer of 2018.

Younger players such as Brazilian trio Vinicius, Rodrygo and Militao (20, 19 and 22 respectively) have all played their part during the run-in, being skillfully deployed by Zidane alongside the old guard such as Marcelo, Toni Kroos and Casemiro as the Frenchman shows glimpses of what the Real Madrid of future years could come to rely on.

Zidane is not a manager with a distinctive tactical imprint along the lines of Jurgen Klopp or Pep Guardiola, and will not leave behind an discernable epithet in the mold of ‘heavy metal football’ or ‘tiki-taka’. Nor is he as bombastic on the touchline as the German or as relentlessly fidgety as the Spaniard.

Zidane will, though, leave behind a trophy cabinet to rival any of his coaching contemporaries, or anyone from any other era for that matter.

A lack of distinctive coaching imprint may make Zidane’s genius harder to measure, but it undoubtedly exists.

If there is any blueprint behind it, then it perhaps lies in his man-management: Zidane coaxes the best out of players rather than coaching it into them.

The 48-year-old French World Cup winner has previously admitted as much in his own words, saying: “I’m a different type of coach, an unusual type of coach I think…

“I was never going to tell Ronaldo or Modric how to kick a ball. No coach who comes in can improve the skills of players like Ronaldo and Modric.

It’s an approach which has again paid dividends for Real in their successful title pursuit, and which Ramos alluded to after the victory against Villarreal sealed the title.

“Zidane is the key. We believe in him and in his work. Every time he comes, what he touches, he has the hand of a saint. He is unique,” the Real Madrid skipper said of his manager.

🎙 Ramos: “Zidane is the key. We believe in him and in his work. Every time he comes, what he touches, he has the hand of a saint. He is unique.”

True, it has not been all smooth sailing for Zidane in what is his second stint in the Real dugout, but even then he has navigated the ups and downs without significant disruption.

The sight of a playful Gareth Bale putting his feet up on the bench while still taking home a reported €400,000 a week has infuriated the Real fan base even more, but Zidane has continued to keep things civil in public – even if it’s clear bridges have been irreparably burnt with a player he was desperate to offload last year.

A similar misfit is on the books in the form of James Rodriguez, while Luka Jovic’s future at the Bernabeu remains up in the air, not least after his quarantine-flouting antics during the coronavirus-enforced break.

Real are also yet to see the best from big-money Belgian winger Eden Hazard, who has struggled for injury and form.

Zidane, however, has been the glue which has stuck things together, the subtle guiding hand which has marshalled the team on their march to the title with a run of form which few would have foreseen.

The contrast with Barcelona could not be more stark as the Catalan club have lurched from crisis to crisis in recent months.

Off the pitch, there was the ugly public spat between Lionel Messi and sporting director Eric Abidal following the sacking of Ernesto Valverde in January, followed by the Argentine’s apparent dissatisfaction in another rare public statement over the way pay cuts were handled during the Covid-19 break.

Embarrassingly, boardroom officials were also forced to deny accusations they had been running social media campaigns to undermine the reputation of their own players, including Messi.

On the pitch, the appointment of Quique Setien, a devout disciple of Johan Cruyff and the Barca way of playing, has failed to provide the boost the team needed. Beaten by Real just before the break, Barcelona have largely failed to spark during the run-in.

The jury remains out on whether Antoine Griezmann can fully fit into the team alongside Messi and Luis Suarez, while the ageing profile of the squad is further cause for concern.

Lavish expenditure in recent seasons on the likes of Griezmann, Brazilian flop Philippe Coutinho and injury-prone French forward Ousmane Dembele has not helped.

Barcelona’s self-inflicted woes should not, however, detract from Real Madrid and Zidane’s title success. The Frenchman has again woven his magic, capitalizing on the chaos over at the Catalan giants.

As the incessant drip of negative stories emerging from the Nou Camp has become ever louder, Real have solidified and galvanized.

Real’s season is not over, of course. They face a daunting Champions League last-16 second-leg trip to England in August as they seek to overturn a 2-1 first-leg deficit against an impressive Manchester City.

Even with their staggering recent history of success in Europe, Zidane and Real will very much be the underdogs at the Etihad.

But they at least go into that game buoyed by their new status as champions of Spain, and on a run of form unrivalled anywhere in Europe.

And for that, they should again be thankful to their understated French managerial maestro. 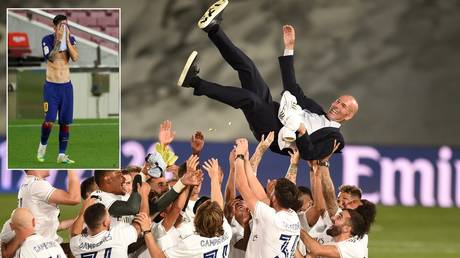