Quique Setien’s reign in charge of Barcelona looks to be edging closer to an end after numerous reports have linked the team’s former talismanic midfielder Xavi with taking over at Camp Nou.

Setien succeeded Ernesto Valverde as coach in January but club officials have reportedly determined that former Real Betis boss isn’t up to the task of leading one of European football’s most traditionally dominant clubs and are poised to take drastic action after surrendering their lead at the summit of La Liga to bitter rivals Real Madrid.

Per reports in Spain, Barcelona president Josep Bartomeu is seriously considering appointing one of the club’s most beloved figures in ex-midfielder Xavi to take charge at the club once the 2019-20 season officially ends, with a view re-establishing the team’s era of success.

Xavi, the diminutive midfielder who crafted so much of the club’s success in the past two decades, would be seen as a return to ‘Barca DNA’ in the club’s coaching staff for the first time since Pep Guardiola’s spell at the club – and while the Camp Nou trophy cabinet hasn’t exactly been bare the past few years, the club’s hierarchy would welcome a return to its footballing roots.

🚨 — Reliable sources in Qatar have reported that Xavi has accepted to coach Barcelona next season. He will only coach them after the end of this season and after this season’s UCL campaign, no matter what. [@FApor_elmundo] pic.twitter.com/8aB3q5bATx

“The biggest hope I have now is to be Barca coach and get Barca back to winning ways,” Xavi said last week. “Not me but these players and Barca triumphing. And as a consequence, our technical staff, who are preparing for it a lot and it makes us really excited.

“I’m a club man. I would like to return at the right moment to start a project from zero. I’ve said it a lot of times but I want to take footballing decisions at Barcelona.

“It’s clear that after the elections the stage would be set, of course. I’m not ruling anything out.

“They came for me in January, we were speaking. I told them the circumstances and timing weren’t right.”

He graduated from the team’s famous La Masia academy and went on to win an incredible 25 trophies in the next 17 years to establish himself as one of the finest players in the club’s history, and has long since been tipped as one day takin a cue from his fellow La Masia graduate Guardiola and taking over the manager’s job.

Xavi left Barcelona following the 2015-16 season after 767 appearances for his boyhood club to take up the option of a few money-spinning seasons in Qatar, and took his first steps in management with Al-Sadd in 2019 but according to Mundo Deportivo, he has agreed a €6 million salary to return to Spanish football.

Several other contenders have been linked to the club, including the likes of former player Ronald Koeman, Belgium boss Roberto Martinez and Javier Garcia Pimienta – current coach of the Barca ‘B’ team. 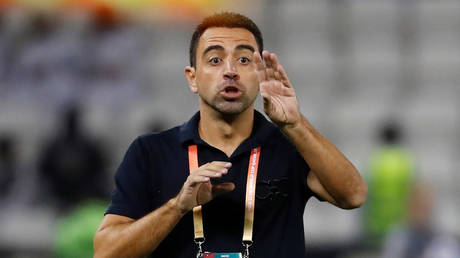 Pub-goers returning to the bar tom...