Barcelona chiefs have reportedly held an emergency meeting with head coach Quique Setien to reassure him that his position is safe despite increasing rumors of a rift with players and discontent over the club’s form.

Since the resumption of football in Spain after the coronavirus-enforced break, Barca have seen a two-point lead at the top of La Liga turn into a two-point deficit as Real Madrid now lead the way with just six games remaining of the campaign.

The Catalans were held to a 2-2 draw at lowly Celta Viga on Saturday, and host Diego Simeone’s Atletico Madrid at the Nou Camp on Tuesday night in a game which could have further bearing on where the La Liga title ends up this season.

Saturday’s scenes at Celta included an apparently disillusioned Lionel Messi walking away while assistant coach Eder Sarabia attempted to give him instructions.

This is very clear that Messi does not respect Eder Sarabia, Quique Setien’s assistant manager.

A shame that Barcelona is going through this. pic.twitter.com/c77ysunsID

The appointment of Setien in January in place of the sacked Ernesto Valverde has not handed Barca the boost they craved, with Messi claiming during the Covid-19 hiatus that it would be “impossible” for the team to win the Champions League playing the way they have been under their new mentor.

But ahead of the crunch clash with Atletico, Setien has at least been handed a show of support from club figures who visited his home on Monday, according to reports in Spain.

The meeting may have put Setien’s mind at ease at least temporarily, with rumors swirling in the Catalan media that he could even be replaced by B Team boss Francisco Javier Garcia Pimienta before the Champions League restarts in August.

However, should Barcelona further slip up in the title race during their crunch clash with Atletico on Tuesday, Setien will know that the pressure will be piled on all over again as the team bids to win a third La Liga crown in a row. 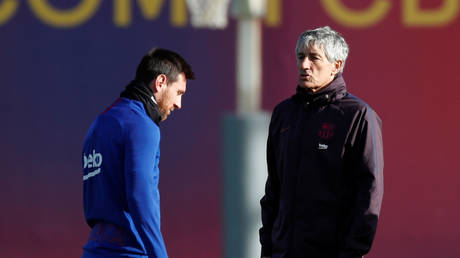