Barcelona head coach Quique Setien has insisted he “doesn’t feel under threat” despite his team dropping more points in the La Liga title race after a draw with Atletico Madrid which saw Lionel Messi score his 700th career goal.

Messi scored a Panenka penalty to put Barcelona 2-1 up in the 50th minute of Tuesday’s game at the Nou Camp, after a penalty from Atletico’s Saul Niguez had canceled out a Diego Costa own goal.

Messi’s dinked spot-kick saw him join an elite club of just seven players to have reached the 700-goal milestone in their careers, but it wasn’t enough for Barcelona to take all three points as Saul added a second penalty in the 62nd minute to earn a share of the spoils for Atletico.

The result leaves Barcelona one point behind Real Madrid in the La Liga title race, with their rivals having a game in hand.

The Spaniard, who took over from the sacked Ernesto Valverde in January, was again forced to field questions over his handling of the team amid rumors of player discontent.

Blockbuster signing Antoine Griezmann, who arrived last summer from Atletico for €120 million, started on the substitutes’ bench against his former club and was only called into action in injury time.

Setien, however, defended his use of Griezmann and claimed he felt safe in his position despite the mounting pressure.

“I understand it’s tough for Griezmann to come on when so little time left. I will speak with him tomorrow, I won’t say sorry because (it’s about) decisions,” Setien said.

“But I understand he may feel bad and I feel bad for him because he’s a great person and professional.”

Reports emerged this week that Barcelona bosses including president Josep Maria Bartomeu had held a crisis meeting with Setien following the 2-2 draw against lowly Celta Vigo at the weekend, but had offered a show of support for the increasingly beleaguered coach.

Setien acknowledged the meeting, but claimed he did not feel under pressure.

“I don’t feel at all under threat. (The result) is a shame. We’re having more and more difficulties,” the 61-year-old said.

“Leaving these points behind means we’re moving further away from the title. But we have to keep working and Atletico are a good team.”

Next up for Barcelona is a trip to sixth-placed Villarreal on Sunday night, although by then they could be fully seven points off Real, who play Getafe on Thursday and Athletic Bilbao in Sunday’s early kick-off. 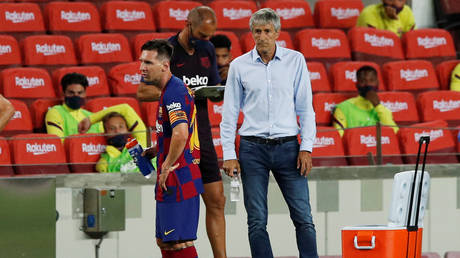