Barcelona have begun legal proceedings in preparation for another round of wage cuts, but club vice president Jordi Moix has said players will not necessarily be subject to them, according to reports in Spain.

Marca reported the reductions would be universal across all staff at the club including those in the first team squad, who are said to have been asked to choose someone to represent them in the negotiations alongside other employees on the Business Committee.

Options for representatives are reported to be limited as many players are currently with their national teams during the international break.

In March, the club applied for an ERTE as Barca players accepted a 70 percent pay cut so that non-playing staff could continue to receive their full wages, but the furlough scheme ended in September.

The way the issue was handled led to a backlash from club captain and star man Lionel Messi, who publicly expressed his anger at the perception that players had been unwilling to take cuts.

Moix suggested players might not be included in wage reductions this time around, though.

He told RAC1 (via Sport): “This is an exceptional situation and we have to look for solutions in the club to balance the budget in the best possible way. It will not be easy but I don’t want to contemplate more losses in the future.

“The reduction is not necessarily for the players, because there can be mixed formulas… We can adjust the contracts following sporting criteria, proportionality or sporting circumstances.”

He added that despite the impact the pandemic has had on Barca’s finances, he is “optimistic for the future because I see the glass half full, with important challenges to come.”

However, on Monday, Barca revealed their accounts for the 2019-20 season in a statement, which revealed a net loss of €97 million ($114 million) after their debt more than doubled from €217 million to €488 million, with Covid-19 being a significant factor in that rise.

Cutting player wages could prove to be quite the headache for the club if they were to go that route again, though, as employees and players can cancel their contracts in the event of wage reductions.

As such, it’s said individual agreements would need to be made with each player to avoid losing them for free.

The news comes amid that Barcelona will soon face a presidential referendum after a vote of no confidence in president Josep Maria Bartomeu.

The required number of votes to trigger the referendum – 16,521 – have reportedly been confirmed after counting began last week on the 20,687 total votes that were cast by club members against Bartomeu on September 17.

The referendum, which is unlikely to be held before mid-November at the earliest, will require 66 percent of the vote to eject the incumbent from his position. 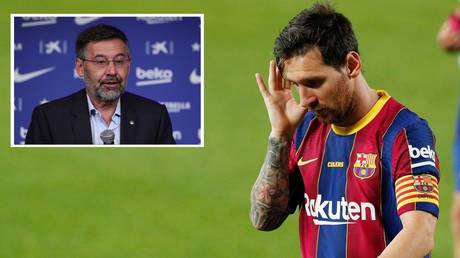