Julia Vins is a Russian powerlifter who shot to internet fame for having a highly developed muscular body along with a pretty, Barbie-like face.

Nicknamed ‘Muscular Barbie’, Vins has been practicing powerlifting for seven years and has achieved spectacular results in the sport, which is gaining popularity among female athletes.

The 24-year-old, whose biceps are 40cm (16 inches) in diameter, holds the International Powerlifting Association’s world squat record of 252.5 kg (557 pounds). She is also an all time junior record holder in bench press, coping with the weight of 165kg (364 pounds).

“When I was 15, I realized I needed to change something with my life. I was not satisfied, with everything,” Vins said.

“I did not do anything, I was very skinny. So I decided that I needed to become stronger – physically and mentally.

“People know me as ‘Muscle Barbie’ – I like this comparison. It’s nice. I have these big, beautiful eyes and wear make-up. But at the same time, I’m strong. I can deadlift 190kg (419 pounds) in training. I want to become as big as possible.”

The athlete denies taking any steroids or prohibited medicine, insisting she has built her body through hard training.

Vins also has embarked on an acting career, being filmed for a cameo in Russian movie ‘Cosmoball’, which will be released later this year. 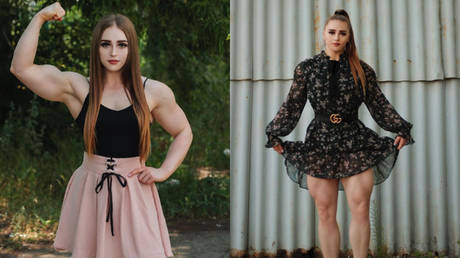