Football fans have been putting the boot in after Turkey finished a woeful Euro 2020 campaign with defeat against Switzerland in Baku – making yet more of a mockery of their status as pre-tournament dark horses.

With Senol Gunes back at the helm and the likes of Burak Yilmaz rolling back the years alongside some hotly-tipped younger talent, hopes had been riding high that the Turks could be an outside bet this summer.

But to say they barely got out of the traps would be an understatement.

Battered by Italy 3-0 in Rome in the opening game of the tournament, Turkey followed that with a 2-0 defeat to Wales in Baku – a venue many felt would be like a home from home for them due to the ties between the two nations.

But it was the same story in the Azeri capital on Sunday night as this time it was the Swiss who rolled Turkey over.

Haris Seferovic opened the scoring after just six minutes when he swiveled and fired home from the edge of the box.

Twenty minutes later and the lead was doubled through another superb finish as Xherdan Shaqiri curled the ball beyond Ugurcan Cakir with an effort from the edge of the box.

Shaqiri almost made it three when he raced clear but, Cakir stuck out a leg to direct the ball just wide of the upright.

At the other end, a good save from Yann Sommer at full stretch denied Mert Muldur as the Turks desperately tried to salvage some pride.

Sommer had left the Swiss camp earlier in the week to attend the birth of his second child, but was on hand here to help deliver a vital victory for his.

Turkey looked cooked by half-time but at least managed to save some face by not going the entirety of the tournament goalless.

They finally troubled the scoreboard in the 62nd minute when Irfan Kahveci curled a delicious left-footbed strike into the top corner.

Unsurprisingly, any celebration among the players was hard to discern.

TURKEY HAVE DONE A GOAL

If the goal meant little to the Turks, it was much more damaging to the Swiss in their battle with Wales for second spot, which was set to go down to goal difference.

But Turkey’s dodgy defence duly obliged again soon after as Shaqiri burst onto a ball from the left and swept home to restore a two-goal cushion.

There was time for Granit Xhaka to strike the post from a free-kick as Turkey’s humbling was almost compounded.

The result finished 3-1 as the Turk crashed out bottom of Group A without a single point.

Many were wondering it if was inevitable that the Turks would fall foul (or should that be ‘fowl’) of their pre-tournament billing as one of the teams to watch among the outsiders.

“Turkey hands down putting in one of the worst displays at a Euro that I can remember. Absolutely horrendous from start to finish for them,” tweeted football writer Andrew Thompson.

“One of my goals in life is to become as highly rated as Turkey were before they actually had to play some football in this tournament,” wrote Athletic reporter Liam Twomey.

Turkey hands down putting in one of the worst displays at a Euro that I can remember. Absolutely horrendous from start to finish for them. #SUITUR

Elsewhere, the puns and jokes were out in full force, while one troll account summed things up by saying: “Turkey came to the euros to lie us.”

Switzerland are destroying a team that have gone “cold Turkey” pic.twitter.com/xh7lMMG2Zb

Turkey the surprise of the EURO’s highlights pic.twitter.com/VVgoaU0p3n

Turkey came to the euros to lie us.

Despite their win, the Swiss finished third in the group on goal difference after Wales fell to a narrow 1-0 defeat in Italy.

The impressive Italians – who made it three wins from three – qualify automatically for the last 16 alongside the Welsh as the top two in the group.

The Swiss will be forced to wait and see if their points and goal haul is enough for them to sneak into the knockout stages as one of the four best third-placed teams.

Turkey, meanwhile, are on a direct flight home.

Everyone who had Turkey as their dark horses for #Euro2020 right now pic.twitter.com/70FTZryVrT 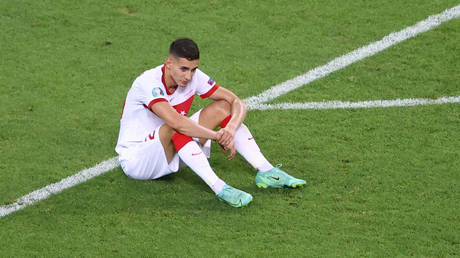