Bellator MMA fighter Valerie Loureda has been given some heavyweight backing from pop megastar Demi Lovato as the fighter took another shot at critics who claim she is ‘just an Instagram model’.

Flyweight Loureda – who boasts a unbeaten record in three professional outings – has been accused of flaunting her figure on social media rather than focusing on her fighting, with UFC rival Macy Chiasson saying the Miami native was “selling sex not MMA” with her racy Instagram output.

Loureda also felt disrespected in the build-up to her last fight against Tara Graff, which ended in a second-round KO victory for the rising Bellator prospect.

After flooring Graff with a vicious right hand and following up with a ground-and-pound barrage to finish the fight, Loureda broke into a dance in the cage and later took to social media to post an image of herself along with the sarcastic caption “Just an ig model”, in a clear barb at her detractors.

Just this week, Loureda faced yet more suggestions that she was more model than MMA fighter after sharing bikini-clad images from her Miami home.

“When is that OnlyFans coming?” one Twitter user was prompted to inquire.

“NEVER ! I WILL NEVER SELL MY BODY THAT I HAVE WORKED SO HARD FOR FOR MONEY THATS WHY I TRAIN SO HARD EVERYDAY!!!!! I DO NOT NEED THAT PLATFORM!” Loureda snapped back.

NEVER ! I WILL NEVER SELL MY BODY THAT I HAVE WORKED SO HARD FOR FOR MONEY THATS WHY I TRAIN SO HARD EVERYDAY!!!!! I DO NOT NEED THAT PLATFORM!

The taekwondo master has now been backed in her battle with her critics by pop megastar Lovato, who shared a message of support for Loureda to her 93 million followers on Instagram.

“Look at this badass boss lady,” read a message on the singer’s Instagram stories along with a picture of Loureda celebrating in the cage.

“Never let people define you or put you in a box. This martial artist is so much more than skin deep. It’s time people recognized other’s potential rather than placing women in a box because of their looks. Women can be  powerful, a force and sexy – all can be and are true – keep doing you boo.”

Loureda responded gushingly to the praise, writing: “I love you Demi, I look up to you so much.”

The 22-year-old starlet – nicknamed ‘Master’ because of her taekwondo prowess – trains at the fabled American Top Team gym in Coconut Creek and counts UFC icon Jorge Masvidal as among her biggest fans. She’s also been pictured with 28-year-old pop queen Lovato in the past.

Loureda, who has a rapidly-growing following of 515,000 on Instagram, penned a new multi-year deal with Bellator after her explosive win against Graff, signaling the promotion’s desire to keep hold of one of MMA’s most eye-catching young prospects. 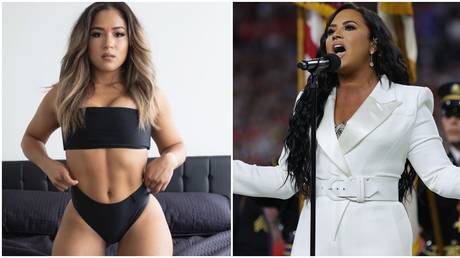