Romelu Lukaku and several of his Inter Milan teammates have found themselves in a spot of bother after the Belgium star was fined by local police for hosting a birthday party for himself in violation of Italy’s Covid-19 rules.

The police raid, which is said to have taken place at the Square Milano Duomo hotel, came just hours after Lukaku scored the third goal in Inter’s 3-1 victory against Roma at the San Siro on Wednesday as Antonio Conte’s champions extended their lead in the Italian top flight to 13 points ahead of second-placed Atalanta.

It is understood that Lukaku, who has scored 22 goals this season to help his side end Juventus’ stranglehold over Serie A, was celebrating his 28th birthday when police – who were reportedly acting on a tip-off – entered the venue at around 3am local time, where they found Lukaku with 23 other guests, also said to have included ex-England international Ashley Young.

Inter teammates Achraf Hakimi and Ivan Perisic are also said to have attended the festivities. It is understood that Lukaku’s guests were subject to fines by the authorities.

“At 3am last night, in Milan, Police intervened in a hotel in the city centre, where in an events room there was the birthday party of Inter footballer Romelu Lukaku,” read a police statement issued on Thursday.

“Another 23 people were identified, including some other Inter players and the hotel’s director that organised the event. The director and the guests will be sanctioned for violating the Covid-19 rules.”

Italy’s current coronavirus restrictions mean that Milan has been designated as a ‘yellow zone’, which allows people to move freely within other regions also given that designation.

Lautaro Martinez acted badly after being substituted last night, so him and Antonio Conte had a boxing match at Inter training today.. 🥊

Lukaku on the mic 😂🎤pic.twitter.com/1lcpctJdID

Until June 15, people are only allowed to move between regions once per day, while there is also a curfew imposed between 10pm and 5am. According to the Daily Mail, suspicions were first raised when Lukaku’s party extended past the curfew time.

The situation appears similar to the one which befell Juventus trio Weston McKennie, Paulo Dybala and Arthur, who were found to have breached Covid protocols by attending a party last month before being dropped by manager Andrea Pirlo.

“It was not the right time to do it [have a party],” Pirlo said of the incidents. “We are examples and it is right that we behave [as such].” 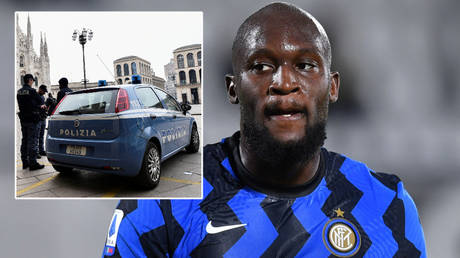 Why is the US removing Xiaomi from...