‘Back where you belong’: Mesut Ozil ‘happy’ at return of Gunnersaurus after offering to pay axed legendary Arsenal mascot’s salary

‘Back where you belong’: Mesut Ozil ‘happy’ at return of Gunnersaurus after offering to pay axed legendary Arsenal mascot’s salary

Arsenal’s forgotten man, Mesut Ozil, has stayed in the spotlight off the pitch by praising the return of the club’s long-serving mascot, Gunnersaurus, who was made redundant earlier this year in an unpopular move with fans.

Fans and high-profile figures accused club executives of showing a lack of solidarity with staff when the much-loved mascot, manned by employee Jerry Quy, was axed as a cost-cutting measure while fans continued to be banned from the club’s Emirates Stadium in London.

Ozil, whose $450,000-a-week salary came under considerable scrutiny as the club announced plans to cut 55 people from its payroll, had claimed he was distraught when he learned of the lay-off.

“I was so sad that Jerry Quy, aka our famous and loyal mascot Gunnersaurus and an integral part of our club, was being made redundant after 27 years,” the former Germany international explained on Twitter.

Happy to see you back where you belong 👍🏼#YaGunnersYa https://t.co/6vffAervHI

“As such, I’m offering to reimburse Arsenal the full salary of our big green guy as long as I will be an Arsenal player so Jerry can continue his job that he loves so much.”

Arsenal have reportedly not taken Ozil up on his offer, remaining desperate to remove the man who has not made a single appearance for them this season from their books.

“Happy to see you back where you belong,” wrote Ozil, responding to a post from Gunnersaurus’s account portraying the replica reptile standing on the sidelines at the club’s home.

Jettisoned Quy is understood not to have been inside the suit, although he is reportedly part of a revolving roster of entertainers who will take up the role.

An Arsenal spokesperson said: “As we’ve always said, Gunnersaurus is an important part of Arsenal and a popular figure for our fans around the world.

Now we just need to see you back where you belong Mesut. pic.twitter.com/F8IotTc5UL

The struggles along the way are only meant to shape you for your purpose. 〽️ #M1Ö pic.twitter.com/S9jyARVNN7

“Gunner never went away but, due to the virus restrictions, there have been limited opportunities for him to appear in public.”

Despite not playing for the club for eight months, Ozil has continued his campaign to position himself as one of Arsenal’s keenest fans in recent days, providing a riposte to accusations that his determination to see out his contract until 2021 is motivated purely by money.

While his teammates were playing at Manchester United earlier this month, the playmaker showed himself watching on a laptop on a sofa and celebrated with his Twitter following of more than 25 million after the Gunners won 1-0.

He showed his support for Arsenal Women when they also took on United, said he was “excited” before Arsenal lost 3-0 at home to Aston Villa on Sunday and has filmed himself working out in a gym, adding: “The struggles along the way are only meant to shape you for your purpose.”

Almost time for the big game #MUNARS 💥 We need this win for a ton of reasons today 🙏🏼🙏🏼🙏🏼 I’m optimistic the boys can take away all 3 points – C O Y G ❤️ #M1Ö #YaGunnersYa @Arsenal pic.twitter.com/8mTqv5Fmyo

Fans reacted enthusiastically to Ozil’s tweet about Gunnersaurus, with one calling the pair “two Arsenal legends”.

“Now we just need to see you back where you belong Mesut,” said one respondent, while another added: “They would have quietly tried to get rid of him if Ozil hadn’t said something.

“They have been friends for years as Ozil always has sick and underprivileged kids in his box for matches and [Gunnersaurus is] there.”

Ozil has publicly praised United forward Marcus Rashford’s campaign to persuade the UK government to continue to provide free meals for schoolchildren, and last month it was revealed that the midfielder had been providing meals for a similar scheme in the London area.

Keir Starmer, the leader of the opposition Labour party, was among those to side with Ozil while criticizing Arsenal’s approach to protecting jobs during the pandemic.

“That’s the kind of message footballers should be sending,” said a spokesperson for the politician.

“Football clubs need to demonstrate the values that have come out so strongly during this pandemic, which is compassion, decency and fairness, and we hope all the clubs take this on board. 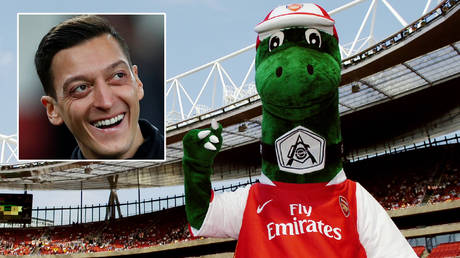