Back together: Luis Suarez drives best friend Messi to the airport as ex-Barcelona pairing head to internationals together (VIDEO)

Back together: Luis Suarez drives best friend Messi to the airport as ex-Barcelona pairing head to internationals together (VIDEO)

Lionel Messi has been driven to the airport by departed strike partner Luis Suarez as the pair maintain their close friendship despite being separated by Barcelona, sharing a ride on their way to games with Uruguay and Argentina.

New Atletico Madrid signing Suarez headed to Barcelona Airport with Messi in the back, pulling up to be surrounded by members of the press as the Argentine star opened the door to get out.

Barcelona’s record all-time scorer signed replica shirts and other items as he made his way to the boot of the vehicle, followed by Suarez, who helped him to retrieve his bags before they both made their way inside the airport terminal.

Messi made his dismay public as Suarez was sold to Atletico for less than $7 million last month, speaking of his “love” for his teammate and confidant, who shared dinners with him including a meal in a restaurant after Messi handed in a shock transfer request in August.

Because they are all using Messi’s private plane.

Messi chattered a private plane for a lot of the South American players to get to South America for the games, I can’t remember how many

Both players begin with a home match as they return to international action in a World Cup qualifying double-header starting later this week, with Suarez’s Uruguay hosting Chile on Thursday and Messi’s Argentina welcoming Ecuador the following night.

Uruguay then travel to Ecuador on Tuesday, while Argentina visit Bolivia on the same night.

Fans watching the video speculated that Messi had hired a chartered plane for some of the players who will be involved in matches in South America during the round of fixtures.

“Friends forever,” said one fan. “This is the real meaning of old guard.”

Messi admitted that it would be “strange” to see Suarez playing for another team and blasted Barcelona again after his friend was abruptly axed.

“You deserved a send-off matching who you are – one of the most important players in the club’s history, achieving important things both as a group and individually,” he told him in a public Instagram post.

“Not to get thrown out like you have been. But the truth is, at this point nothing surprises me.”

Suarez duly shone on his debut for his new club, scoring twice in a 6-1 opening day win against Granada, although he has failed to repeat the trick since as the Champions League contenders have recorded two stalemates.

Messi’s solitary goal in three matches has been a penalty in Barcelona’s opening 4-0 win against Villarreal, and he was unable to prevent them dropping points for the first time this season as they recovered from conceding an early goal to draw 1-1 at home to Sevilla on Sunday.

Both established stars have been outshone so far by the precocious Ansu Fati, the 17-year-old who has already scored three times in his first full senior season in La Liga and is hoping to add to his first international goal when he joins Spain for three fixtures in six days. 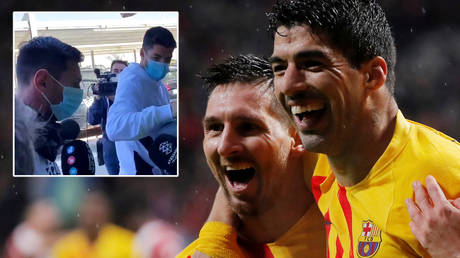 Schools slammed for serving up sub...