Masai Ujiri’s legal team has produced body cam footage showing a sheriff’s deputy shoving the Toronto Raptors president of basketball operations and yelling “back the f*ck up”, disproving a suit which claimed he was the aggressor.

The footage shows Ujiri attempting to enter the court at California’s Oracle Arena moments after the Raptors had beaten defending champions Golden State Warriors in the best-of-seven series to win the NBA Finals last June.

Masai Ujiri’s legal team has released body camera footage of his encounter with a security worker at Oracle Arena after the Raptors won the NBA championship. pic.twitter.com/56XWMpZy0P

As Ujiri attempts to present his credentials, the video shows the Nigerian-Canadian being immediately shoved by deputy Alan Strickland, who then follows up with a profane verbal volley, telling Ujiri to “back the f*ck up” before again pushing him in the chest.

A lawsuit filed by Strickland in February claimed that Ujiri was the aggressor, had attacked him “and hit him in the face and chest with both fists.” Further claims alleged that the 48-year-old had suffered injuries to his jaw, chest, face and teeth and that he had not worked since the alleged assault.

Another angle of the incident however does show Ujiri pushing back at the officer after the second shove, although the question of who was the aggressor has now been effectively decided.

The security video from the end of Game 6 in Oakland has been released. It’s pretty clear Deputy Alan Strickland was the aggressor in this altercation with #Raptors President Masai Ujiri. This cop is a straight clown. pic.twitter.com/ANaOLWRmHh

Strickland also claimed he “suffered, and will continue to suffer, physical, mental, emotional, and economic injuries, including, but not limited to, lost wages, lost opportunity for financial gain, future earning capacity, and past and future medical care and expenses.”

Raptors released. statement on Tuesday in which it claimed Ujiri “was not an aggressor, but instead was the recipient of two very violent, unwarranted actions.”

Clearly hear someone say he’s the president of the raptors and he still shoves him. Wtf

The sheriff doubled down on his claims. Guess he forgot his cam was rolling or probably thought he turned it off. Nothing new in the world of police

We have to wait over a year, to see that not only was this ‘officer’ lying, but that he had the full support of his entire department for it to get this far.
Even when there was video.
This is the police.

The online reaction in the sports world has largely been one of disgust at the officer’s alleged lies since the footage was released, effectively absolving the 2013 NBA Executive of the Year of instigating the altercation.

“We have to wait over a year, to see that not only was this ‘officer’ lying, but that he had the full support of his entire department for it to get this far. Even when there was video. This is the police,” one Twitter user wrote.

Sheriff Greg Ahern had initially sought to charge Ujiri with battery of a peace officer but Alameda County District Attorney’s Office announced last October that it would not press charges. 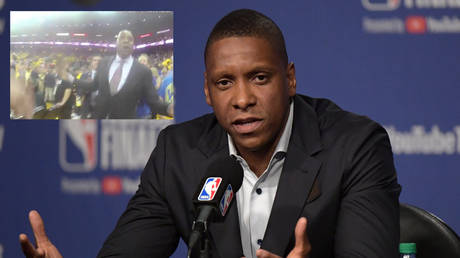