Danielle Collins had an awkward moment in her French Open quarterfinal defeat to Sofia Kenin on Wednesday when she shouted at her boyfriend in the stands to change seats.

The American demanded former Melbourne Demons player Tom Couch, who is also her fitness trainer, leave the players’ box at Court Philippe-Chatrier early in the second set after a frustrating start.

After her compatriot Kenin took the first set 6-4, Collins encountered further difficulty in the first two games of the second as she bid to get back into the contest.

The 26-year-old hit three consecutive double-faults in the first game – though she nevertheless held her serve – and failed to convert two break points in the second, at which point she shouted at Couch: “Sit in a different spot. SIT IN A DIFFERENT SPOT. I’m distracted.”

Couch duly obliged and the move appeared to work for Collins, who proceeded to take the second set 6-4 to force a decider.

Did that “Come On” make it across the ocean, USA?

The 32-year-old was subsequently spotted on the other side of the stadium.

Collins said of the moment: “I had my boyfriend move to a different spot because I was distracted by something in front of him. I just wanted to be able to look at him from a different location.

“Sometimes too when I was serving the ball, I could see my team in the background, and I didn’t like that. Actually during the [Garbine] Muguruza match they sat on the side of the court, and then I really didn’t like when they were sitting behind the court when I was playing [Ons] Jabeur.

“Yeah, it was just a mental thing, I guess.”

The impact didn’t last, however, as Australian Open champion Kenin responded with an impressive bagel in the final set, taking the match 6-4, 4-6, 6-0.

The No. 4 seed will take on Petra Kvitova in the semifinal. 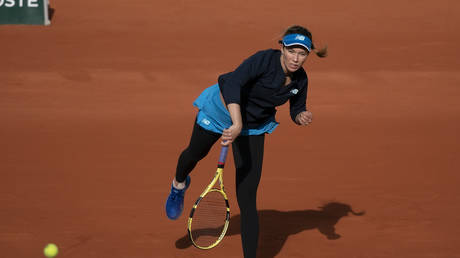