Finnish ace Valtteri Bottas was the class of the field in qualifying for the first Formula 1 Grand Prix of the COVID-19-delayed 2020 season, as he pipped teammate Lewis Hamilton in a dominant session for Mercedes in Austria.

The reigning constructors’ world champions were a class above the rest of the field, with Bottas and Hamilton registering qualifying lap times more than half a second faster than their nearest challenger, Red Bull’s Max Verstappen.

The Mercedes team sported their new all-black livery to support anti-racism initiatives, while Hamilton sported a special “Black Lives Matter” helmet as the team followed up on their headline-making attire with an equally notable performance on the track.

Hamilton topped the timesheets throughout free practice, but Bottas chipped away at his teammate’s advantage to eventually surpass him during qualifying.

Verstappen headed the rest of the field, which saw the remainder of the 10-car Q3 field covered by less than eight tenths of a second, hinting at a close-fought race for the midfield positions.

But while the midfield entries may be steeling themselves for a possible shot at a podium, the Ferrari team were left licking their wounds after a nightmare session.

Former world champion Sebastian Vettel – who Ferrari announced wouldn’t be retained next season – failed to make it through to Q3, while Charles Leclerc struggled to squeeze enough pace from the car to challenge the front runners and ended up seventh. 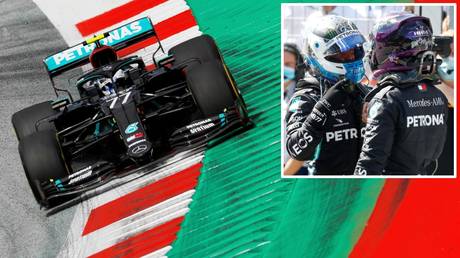