Close
Trending News
HomeSportATP Finals: Rafael Nadal aims to address glaring gap in remarkable résumé – but why has Spaniard struggled so much down the years?

ATP Finals: Rafael Nadal aims to address glaring gap in remarkable résumé – but why has Spaniard struggled so much down the years?

ATP Finals: Rafael Nadal aims to address glaring gap in remarkable résumé – but why has Spaniard struggled so much down the years?

When discussing the seismic achievements of the ‘Big Three’ in men’s tennis across the past two decades, it is normally easier to list what Roger Federer, Rafael Nadal and Novak Djokovic haven’t yet accomplished.

Neither Djokovic nor Federer has won an Olympic gold medal in the men’s singles for instance, yet there are variables at play which explain this outcome.

The competition takes place once every four years, with Djokovic and Federer only competing at three and five Olympic tournaments respectively.

It is also a best-of-three-sets, knockout tournament (aside from the final), with 64 competitors, often played on sub-optimal, hastily constructed outdoor surfaces in peak summer conditions, in front of noisy partisan crowds cheering on their nation’s favorites – where the usual benevolence for the elite players is thrown out the window.

In such an environment, it is no surprise that other world class players such as triple-slam winner Andy Murray have gone home with the gold instead.

It is also worth noting that Djokovic and Federer have also both won medals to take home with them, with the Serbian legend winning a bronze medal in Rio de Janerio, while the Swiss maestro earned a silver in London, alongside a gold with Stanislas Wawrinka in the doubles in Beijing.

The sole black spot on their otherwise unblemished records of conquest is understandable when taking the number of variables into account. It also helps that no one considers the Olympics the pinnacle of tennis, often winning the medals does not even equate to ATP points on the board.

Instead, Rafael Nadal, gold medal winner at the 2008 Olympics in Beijing, has a much more visible empty space in his expansive trophy cabinet, which is otherwise glistening and groaning under the weight of his many personal accomplishments.

In 15 years of professional tennis, at the age of 34, Rafael Nadal – winner of 20 Grand Slams, including a career slam, five Davis Cups, two Olympics golds in the men’s singles and men’s doubles, and year-end number one on five separate occasions, has never won the ATP Tour Finals – the annual showdown among the world’s elite and the curtain closer to every tennis season.

Worth up to 1,500 points, making it the second most valuable tournament on a tennis player’s points tally after the majors, the ATP Finals consists of the world’s eight best-ranked competitors, who play against each other across two groups of four before settling the matter in a semi-final and final, all over the course of eight days.

Considering the sheer competitiveness of Nadal, and his sustained periods of dominance as world number one during his career, it is quite surprising he has never managed to get his hands on the cup. The tournament has taken place for the past 11 years in London, in optimal wind-free conditions on a slow hard court in front of a respectful crowd of international fans at the O2 Arena. This should suit Nadal’s aggressive baseline play and probably enhance the weight of his shots, also making his spins more nuanced, and his exceptional footwork should only benefit from the smooth surface.

Yet, his record under the Southwark dome is wretched, at least by his usual glowing standards. While Nikolay Davydenko, Andy Murray, Grigor Dimitrov, Alexander Zverev, and Stefanos Tsitsipas have all held the trophy aloft since the competition moved to London, Nadal has struggled to even reach finals. His last appearance in the trophy-deciding match was seven years ago in 2013, where he was brushed aside in straight sets 6-3 6-4 by Djokovic who has won four of his five end-of-year trophies in the English capital.

Aside from a deeply competitive 2010 tournament, where he took Federer to three sets, after defeating Murray in a three hour and 11-minute 7-6 (7-5) 3-6 7-6 (8-6) semi-final that is probably the best-quality match played during the tournament’s spell in London, he has really struggled to even put together a strong run in the championship.

This record could improve on the continent when it moves to Italy, but Nadal’s statistics were no better in Shanghai. During the ATP Tour Final’s four years in Asia, between 2005-2008, he never reached the final despite winning five majors, two gold medals, and climbing to world number one during those four years.

Overall, his career win record is 83.2 percent, the highest in the Open Era. By contrast, his win percentage ratio over 32 games in Shanghai and London since 2006 stands at 56.3 percent – a whopping 27 percent difference, which would be comparable to the American Sam Querrey’s overall career record.

Part of this can be explained by the quality of the opposition, and the concentrated nature of best-of-three-set matches, and the slightly unorthodox round robin scoring system, but ultimately this has never held back Djokovic or Federer who share 11 ATP World Tour Finals titles between them, with Federer winning the most in the history of the sport with six.

Fundamentally, there is no defining variable in tennis terms to explain this aberration. His game style has worked on slow hard courts before – he has won the US Open four times, alongside the Australian Open in 2009 in a legendary battle with Federer.

While Nadal probably favors Slams over the year end tournament, he is arguably the sport’s ultimate competitor and there is no doubt he wants to win this trophy.

Instead, it seems that it is the issues on the treatment table which are holding Nadal back in the concluding championships of the tennis season.

Nadal has missed six end of season championships so far in his career since he pulled out with a foot injury from Shanghai in 2005. He has probably not turned up not fully fit at three others, although it is difficult to say as the Spaniard tends to be very gracious after defeats and play down personal issues.

It is no surprise then, that his results have been affected by the reality of this tournament occurring in November following the conclusion of all four slams.

Throughout his career, the wear and tear to Nadal’s body, possibly a consequence of his consuming, heavy-hitting baseliner style, has caused him multiple sustained injuries that have actually resulted in extended periods not competing at the top of the game, including a three-year gap between him winning majors from 2014 to 2017. He has had issues over his career with both knees, his tendons, his foot, his left arm, his legs, and his back while his coach and uncle Toni Nadal has said the man has been regularly taking pain killers since he was 19.

Coming into the 2020 ATP Tour Finals, the last competition of the year, and final one to take place by the Thames, Nadal is possibly in the healthiest place he has been in during a November tournament. Well-rested during a shambolic season plagued by Coronavirus, where Nadal still managed to get his hands on his 13th French Open, crushing Djokovic in the final, and he now arrives at the O2 Arena as second seed and world number two.

“We can find excuses or reasons but, at the end of the day, the numbers are the numbers,” said the Spaniard of his past struggles at the event. “I think I played less indoors than on the other surfaces, without a doubt… The indoor surfaces have not been the ideal surfaces for my tennis game since the beginning of my career.

”I think I am able to play a little better in the past couple of years indoors than I did at the beginning of my tennis career, without a doubt, but [these are] the numbers. I can’t say something different. I hope to change that this week.”

Despite not playing for five months during the pandemic, Nadal managed to reach the quarter-finals of the Italian Open and the semi-finals in Paris earlier this month, beating both ninth seed Carreno-Busta and tricky customer Feliciano Lopez along the way.

Such results alone don’t guarantee he is primed to be 16th time lucky, but as his talent has never been called into question, winning this trophy has never been a matter of form or skill, merely a matter of conditioning. Even as the young guns have used the ATP Tour Finals to stake their claim as contenders, while Dominic Thiem has separately won his first major, ultimately only two others in the current generation of the sport have shown they can reasonably compete with a confident Nadal at peak condition.

There are too many counterfactuals and uncertainties in a Covid-disrupted era of tennis to make firm predictions, but Nadal must be feeling confident coming to London this year, ready fill the vacant spot in his otherwise complete cabinet. 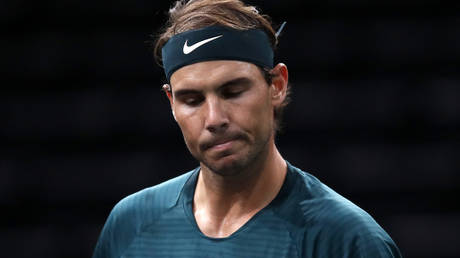