The title is the biggest the Russian has claimed in his career to date and capped a flawless week in the UK capital in which Medvedev won each of his five matches.

For world number three Thiem it was disappointment at the end of a successful year during which the 27-year-old finally made a Grand Slam breakthrough by winning the US Open back in September.

MEDVEDEV’S THE MAN IN LONDON!

Both Thiem and Medvedev had overcome world top two Novak Djokovic and Rafael Nadal in reaching the final in London, with Thiem beating Nadal in the group stage before overcoming Djokovic in the semi-final and Medvedev doing vice versa.

In a showdown between potential serial Grand Slam winners of the future, the early exchanges between Thiem and Medvedev at the O2 Arena went with serve before the Austrian took the advantage in game five, with Medvedev double-faulting while facing break point after being 40-0 up in the game.

It was careless from the world number four, who had largely looked comfortable on his own serve while pressing Thiem when the Austrian was serving.

Thiem consolidated the break to see out the set 6-4 after 49 minutes, benefitting from some good fortunate on set point when the ball flicked the net and headed over the racket of a helpless Medvedev.

Thiem held up his hand in apology, drawing a smile from Medvedev as the first set slipped away for the Russian – just as it had done in his semi-final against Nadal.

The second set initially stayed on serve although Medvedev staved off break point in a tight tussle in game five.

Medvedev then survived two more break points in game seven despite Thiem being well-placed to capitalize on both occasions.

The Austrian screamed in frustration after shanking one shot wide to let Medvedev off the hook, as the Russian moved 4-3 in front in the set.

Thiem was forced to save a break point of his own in game eight, but a toughly contested set remained on serve to go to a tie break.

Medvedev surged to a 6-2 lead in the breaker to give himself four set points, but only needed one opportunity as he fired down an ace to level at one set apiece as the match ticked past the two-hour mark in London.

Medvedev is BACK in business 👊

The early momentum in the decisive set was with Medvedev as he forced the Austrian to save three break points in his second service game. That was ultimately to be a squandered opportunity for Medvedev as Thiem rallied to ensure things stayed on serve.

But the Austrian was increasingly muttering to himself under his breath between points, showing signs of frustration as Medvedev turned the screw by holding to love in the next game.

It shaped up as a third set of attritional rallies from two evenly-matched rivals, but Thiem was finding it tougher going on his serve as Medvedev maneuvered his big frame around the court much more fluidly, forcing the Austrian into an increasing spate of unforced errors.

A wayward forehand in game five allowed Medvedev to rack up yet another break point on the Thiem serve, and while the Austrian dug himself out of a hole to take it to deuce, Medvedev finally took advantage of a third break point in the game – coming to the net to swat away a winner and seize the initiative.

Thiem took Medvedev to deuce in the next game but missed a crucial passing shot to allow the Russian to consolidate the break and move 4-2 ahead in the set.

The Austrian closed the gap with an unusually quick service game, but Medvedev did the same to keep the pressure on, flicking over a delightful backhand winner from close to the net to move to 5-3 and putting himself within one game of the title.

Thiem held serve to stay in the match but Medvedev kept his cool when serving for the championship, picking up the biggest title of his career and also making history by becoming the first man to beat all of the world’s top three on his way to winning the accolade.

Daniil Medvedev is the first player in the history of tennis to beat the world #1 (Djokovic) #2 (Nadal) and #3 (Thiem) to win the Nitto Atp Finals.

This was the longest best of three final in the history of the ATP Finals.

The reaction from Medvedev was subdued in front of the empty stands in London, but it was nonetheless an impressive showing from the Russian, who will now look to kick on in 2021 by adding a Grand Slam title to his name.

This year’s ATP Finals in London were the last to be held in the UK capital after a 12-year stay, with the event moving to Turin in Italy in 2021. 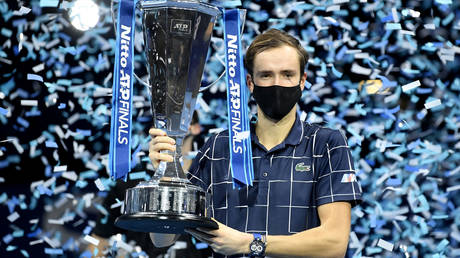