Outspoken striker Zlatan Ibrahimovic has once again said that politics and sport must be kept separate amid a brewing feud with NBA icon LeBron James, who he suggested last week should stay in his lane and “do what he’s good at”.

Los Angeles Lakers superstar James has been one of the louder voices in the US when it comes to issues of social justice and police brutality, two themes that came to a fore towards the end of Donald Trump’s fiercely divisive administration.

James, who was a frequent critic of the Trump presidency, organized a group to help combat voter disenfranchisement in many black communities ahead of the 2020 presidential election – but veteran AC Milan forward Ibrahimovic isn’t a fan of social grandstanding and has again called for the topics of politics and sport to be kept far apart from one another.

“I like [James] a lot. He’s phenomenal, what he’s doing, but I don’t like when people with a status speak about politics,” Zlatan said in comments made in Sweden.

“Do what you’re good at doing. I play football because I’m the best playing at football. I don’t do politics. If I’d been a politician, I would be doing politics.

“This is the first mistake famous people do when they become famous: for me it is better to avoid certain topics and do what you’re good doing, otherwise you risk doing something wrongly.”

Speaking at the end of last month, James promised Ibrahimovic he would “never shut up” and observed that the Sweden legend had once praised Muhammad Ali because of the legendary boxer’s activities inside and outside of the ring.

“He’s the guy who said in Sweden, he was talking about the same things, because his last name wasn’t a [traditional Swedish] last name, he felt like there was some racism going on,” James said at the time.

“I speak from a very educated mind. I’m kind of the wrong guy to go at, because I do my homework.”

“If he wants to come, he’s welcome,” Ibrahimovic said, offering an invite to the Belgium hitman at a press conference for a music festival in Italy. “What happens on the pitch stays on the pitch.” 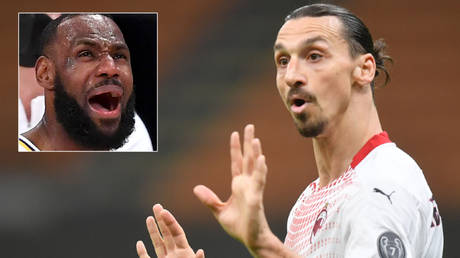