Promising Arsenal youngster Joe Willock was lucky to escape without any serious injury after footage was posted online of him spinning his $185,000 Mercedes into a ditch on a motorway slip road, losing a tire in the process.

Arsenal have had more than their bad luck recently amid patchy recent form, the simmering situation with Mesut Ozil and the acrimonious firing of Gunnersaurus several weeks ago, but they can count their lucky stars that the current situation didn’t worsen recently after footage emerged of one of their biggest prospects involved in what could have potentially been a serious car accident.

21-year-old Willock, who has been on the fringes of Mikel Arteta’s first team squad this season, said he was “shaken” after the crash, which happened when he was driving on the M25 motorway towards Arsenal’s training ground last weekend.

Video of the incident which was posted online shows the Englishman as he appears to be travelling at speed before he enters a slip road towards the motorway, losing control as the car banks to the right. He then attempts to correct the turn but the car violently jerks into the center of the road – and luckily there was no other traffic around him or the situation might have been far worse.

The car – now without its rear right tyre – comes to a stop off the road, with its hood pointing into bushes. A fellow driver who soon came to Willock’s aid and described that he found the footballer to be “shaken but fine.“

Joe willock losing control of his car before his game. At least he’s good now pic.twitter.com/7bUSyEEATJ

Damn Joe Willock is really gutsy for still playing that Leeds match, car accidents can have you rattled and on edge for weeks

Arsenal’s Joe Willock involved in terrifying car crash after £140k Mercedes G-Wagon spins out of control on M25 as he swerved across three lanes and clipped a crash barrier as lost a wheel to his vehicle pic.twitter.com/fb0l2SYSWe

“I didn’t know who he was. He was a bit shaken, but fine,” the eyewitness told the Daily Mail.

“I got out of the car and I went to his window, which was blacked out. You could see that he was trying to reverse back out of the verge.

“The back wheel was missing but you could see the hub spinning out. He wound the window down and I said: ‘You can’t reverse’. He let out a big scream.

“I said: ‘You went around the corner a bit fast’.

The accident is understood to have happened last Saturday afternoon – and it seems that Arsenal chiefs weren’t too concerned as to his physical state after he was handed a rare start in Sunday’s 0-0 draw with Leeds. However, questions have been asked as to whether the player informed his club about the crash after it emerged on Thursday that the Arsenal has ‘spoken to’ him after footage of the crash went viral online. 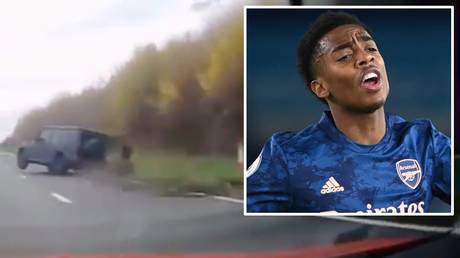