Premier League side Arsenal are to reportedly conduct an internal investigation into the club’s transfer policy after record £72 million signing Nicolas Pepe failed to meet the expectations of his gargantuan transfer last season.

Ivory Coast international Pepe joined the Gunners from French side Lille last summer, with the London club beating out several of Europe’s biggest clubs to secure the player’s signature

But after a debut season that saw the 25-year-old flatter to deceive in North London, questions are now being asked internally as to why such a large transfer fee was paid for a player who has yet to fully bed-in at the Emirates.

READ MORE: ‘It’s an evil world we live in’: Arsenal fans angry as Gunners splash out on Willian signing, just days after LAYING OFF 55 staff

Arsenal denied the report when questioned on the matter by ESPN, but the outlet states that several anonymous sources within the club have confirmed the news, among further issues related to player recruitment after scouts Francis Cagigao, Brian McDermott and Brian Clark (and several others) were recently released from the club, purportedly for cost-cutting reasons.

Pepe’s output of eight goals and ten assists across all competitions is far from terrible, but figures within the club appear to be of the impression that the player’s services could have been acquired for a much less substantial fee.

Arsenal committed to paying the French club £20 million ($26 million) up front, with a further £52 million ($68 million) due in future installments due to be paid over the next five years.

ESPN reports that figures within Lille were surprised by the amount of money that the English side were prepared to pay for Pepe, and the sheer expense of the deal is understood to have led the London club to question their scouting structures, as well as to those who negotiated and sanctioned the deal.

The news comes amid the recent revelation that Arsenal have released 55 members of staff amid the Coronavirus pandemic, while it was also confirmed on Friday that the Gunner have completed the free transfer signing of ex-Chelsea winger Willian – for a deal reported to be worth around £220,000 per week ($288,000), meaning that once signing on fees are considered the full price paid for the 32-year-old could be as much as £35 million ($46 million). 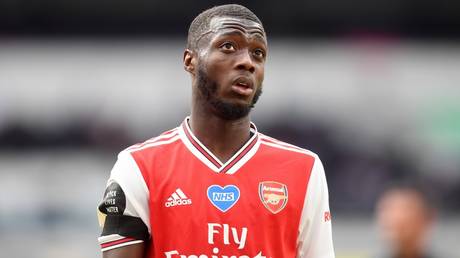