Arsenal playermaker Mesut Ozil has picked up an £8 million ($10.4 million) loyalty bonus despite not featuring for the Gunners since March, according to reports.

Ozil, 31, has not been included in a matchday squad this season by Arsenal boss Mikel Arteta and has not played a single minute of competitive football for the London club since before the Covid-19 shutdown in March.

That has not stopped the former German international from scooping a lucrative loyalty bonus, which he banked in September under the terms of the £350,000-a-week contract extension he signed in 2018, according to The Athletic.

Ozil’s contract runs until the summer of 2021 but he has become an outcast under Arteta, who initially seemed willing to give the midfielder a fresh start when he took over from Unai Emery in December.

Ozil – who is the biggest earner at the Emierates – was given a run of games on the Spaniard’s arrival but has again fallen out of favor, widely being seen as unsuitable for the new high-intensity approach installed by Arteta.

Despite being consigned to the sidelines, World Cup winner Ozil has frequently asserted his commitment to Arsenal, remaining at the club during the summer transfer window – although is likely due to the inability of any potential suitors to match his colossal wages.

Ozil was last week left out of Arsenal’s squad list for their UEFA Europa League campaign, further signaling Arteta’s reluctance to play him, and by keeping his game time down the Gunners will at least save money on appearance-related costs.

Last week also saw Ozil step in to offer to pay the salary for the man who fulfils the role of Arsenal mascot Gunnersaurus, after it was reported he was being laid off after 27 years due to coronavirus-related cuts.

While Ozil was hailed for the step, some saw it as a ‘flex’ against the Arsenal hierarchy after being pushed out of the team. 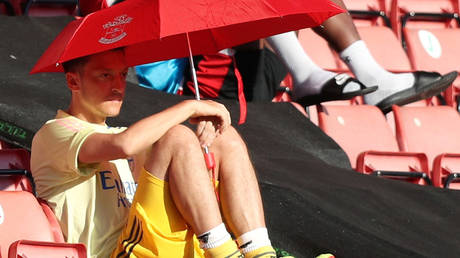 Number of coronavirus patients in...