British provocateur Piers Morgan has waded in following US gymnastics icon Simone Biles’ shock exit from the team event at the Tokyo Olympics, after the 24-year-old star cited mental health issues as the reason for the step.

Biles pulled out of the artistic all-round team final in Tokyo on Tuesday, having stumbled on her opening performance in the vault.

The four-time Olympic champion departed the floor before returning in a tracksuit and cheering on the rest of the US team as their dominance in the event was ended by their Russian rivals.

Speaking to reporters later on, Biles said she wanted to focus on her “mental well-being” and was uncertain of her participation in Thursday’s all-round individual final in Tokyo, where she is due to defend to her Olympic title.

While the US star won widespread sympathy online, one man not buying it was TV personality Morgan, who has previously taken aim at the likes of tennis ace Naomi Osaka for her decision to take a break due to similar reasons as Biles earlier this season.

“Are ‘mental health issues’ now the go-to excuse for any poor performance in elite sport?” Morgan tweeted to his 7.9 million followers in the wake of Biles’ surprise decision.

“What a joke. Just admit you did badly, made mistakes, and will strive to do better next time. Kids need strong role models not this nonsense.”

Are ‘mental health issues’ now the go-to excuse for any poor performance in elite sport? What a joke.
Just admit you did badly, made mistakes, and will strive to do better next time.
Kids need strong role models not this nonsense.

The responses were thick and fast in coming.

“No Piers you are missing the point badly! No matter who you are or how big a ‘star’ in your field you are, you can too suffer this illness. It’s sad that we rely on ‘people’ like you to promote and help with these issues,” read one reply.

“No Piers mental health and having a good ‘mentality’ has an absolute correlation to performance in sport or in life for that matter. Educate yourself,” added another person.

One reply blasted back: “Your brain can’t handle even the slightest opposition to your viewpoint and you think you can talk about the mental health of elite athletes with the world on their back? It’s their honesty in this matter that makes them stronger role models, not weaker.”

But there was also support for Morgan’s stance.

“[Biles] had lost it before she got out there. Didn’t land her warm-up vaults, the vault she took was very poor standard and went straight to the coach to say she was done. Clearly has problems but for her teammates should have recognized it before they started and withdrew,” wrote one person.

“I have to agree with you on this. Mental toughness is a huge part of being a champion. I have never heard of an Olympic athlete not being under extreme pressure We are building a society where no one takes responsibility for his/her downfall,” said another.

Others, meanwhile, were busy praising Biles for her step as well as the fact that she stayed to cheer on her teammates as they battled the Russian team before falling short for the first time at an Olympic Games since 2008.

“Simeone Biles already won. She is a class act. Withdrew from team competition after vault… stayed and cheered on her teammates… got them chalk for their hands… encouraged… hugged them. She already won. Congrats on the silver,” gushed US TV personality Hoda Kotb.

Someone said it best. @Simone_Biles already won. She is a class act. Withdrew from team competion after vault… stayed and cheered on her teammates… got them chalk for their hands.. encouraged.. hugged them. She already won. Congrats on the silver medal! @TeamUSA @USAGym 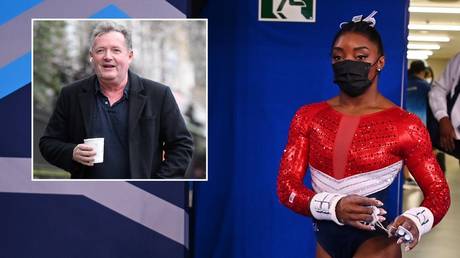