Paralympian Ihor Tsvietov says he was showing “respect for Ukraine” when he shunned a pair of Russian sprint rivals on the podium in uncomfortable scenes in Tokyo.

Safronov stormed to the gold medal in a new world record time of 11.39 seconds, while Kalashian claimed bronze.

After the three medalists were separated by less than half a second on the track, Ukrainian Tsvietov wanted to make sure there was plenty of distance between them on the podium.

The 27-year-old star was seen shuffling on the spot when his Russian rivals gestured for him to join them on the top tier of the podium for the traditional medal photo opportunity.

After the uncomfortable scenes were widely shared online, Tsvietov explained his thinking.

“Someone sees this as disrespect for my competitors. And someone sees respect for Ukraine. To each their own… With Ukraine in my heart,” wrote the runner on Facebook.

A double gold medalist from the Rio Paralympic Games five years ago, Tsvietov added: “The 200 meters is still ahead. I’ll do my best to take Ukraine to the podium.”

Political tensions remain high between Moscow and Kiev after the return of Crimea to Russia in a landslide referendum in 2014 and amid ongoing conflict in the Eastern part of Ukraine.

Tsvietov may well have been influenced by the scandal which erupted in his homeland earlier this month, when Ukrainian high jumper Yaroslava Mahuchikh was heavily censured for being photographed alongside Russian star Mariya Lasitskene.

The beaming pair posed with the Ukrainian and Russian Olympic Committee (ROC) flags in a display of emotion, apparently forgetting that politics quite clearly trumps sport (at least if you’re Ukrainian).

The 19-year-old Mahuchikh – who is a junior sergeant of the Armed Forces of Ukraine – was later called on by the Ukrainian Ministry of Defense to explain herself.

She issued a lengthy Instagram post in which she ensured her compatriots that she was loyal to her county – warning them to be vigilant “because the enemy is ready for anything.”

Paralympic star Tsvietov is clearly on his guard. 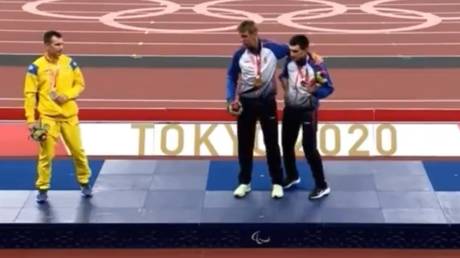 ‘Longer in the toilet than it took...

What’s the future of oil productio...

‘You can smell the blood from...