Football commentators have fallen foul of anti-racism campaigners after a study accused them of being “racially biased” and praising players with a lighter skin tone more often than their darker-skinned counterparts.

According to research from Danish firm RunRepeat, in association with the English Professional Footballers’ Association (PFA), commentators across four of Europe’s top leagues showed clear “racial bias” by praising lighter-toned players more often for aspects such as their “intelligence” while reducing darker-toned players more readily to descriptions about their physical attributes.

“The continuous praise for players with lighter skin tone for their skill level, leadership and cognitive abilities combined with the continuous criticism for players with darker skin tone is likely to influence the perception of the soccer watching public,” said the study, which looked at 2,073 statements made about 643 different players by English-speaking commentators across the top tiers in England, France, Spain and Italy.

In contrast, lighter-skinned players received more than 60 percent of the total praise regarding work ethic and versatility.

Speaking to the BBC, PFA equalities executive Jason Lee said the findings were more evidence of an “unconscious bias within sport.”

“If you’re describing two types of players, one is white and one is black, and they are both doing exactly the same thing and yet for the black player you are picking up on the negative side of it and for the white player it’s the positive side,” Lee said.

“A black player will be perceived as having pace and power and aggression, and a white player will have ingenuity and creativity and determination, different traits, when it could be the reverse.”

“I think it’s damaging in the long term because when players leave their playing career and they go into coaching or managing, or want to be seen in a more positive light, people will have already built up this perception because for 10 or 20 years all you’ve heard of is that person is quick, powerful and aggressive, and you’ve not heard they are actually intellectual, articulate and [have] a quite different set of skills,” Lee added.

The research was met with skepticism by some online, with fans claiming commentators simply called what they see unfolding in front of them.

So what now, commentators are going to have a quota for criticising each player? Each player has a maximum of 5 and the number of criticisms must be evenly spread at the end of the game. If not, the commentator is suspended?

So Adama Traore is one of the fastest players in the prem, so are commentators now not allowed to comment on his speed and pace just because he’s black???

Others however were adamant that even though commentators did not purposely denigrate darker-skinned players, they nonetheless clearly displayed unconscious bias in how they described them.

Sadio Mane for instance is often described as fast, strong and skillful. There is very little mention of the high football intelligence he clearly posses and the speed at which he assess situations. I see a lot of black players described in this manner.

It is proven that black players are more likely to be described as ‘weapons’, or, ‘dangerous’; white players as ‘technical’, ‘intelligent’ etc. This, whether you like it or not, feeds unconscious bias.

The report isn’t the first to see racial bias by those calling the action for fans. A study into NFL draft prospects between 1998 and 2007 on the Sports Illustrated website showed how black quarterbacks were more often praised for physical qualities, rather than their intelligence.

Football has recently undertaken a widespread show of support for the Black Lives Matter movement, including players across Europe’s top leagues ‘taking a knee’ in a display of solidarity. Players in England’s Premier League have also had ‘Black Lives Matter’ printed across the back of their shirts in place of where their names would usually be. 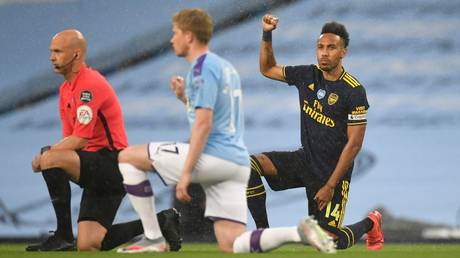