Russian ace Andrey Rublev has recorded a career-best run at the French Open, advancing to the quarterfinal after defeating Hungarian rival Martin Fucsovics in four sets, 6-7, 7-5, 6-4, 7-6.

Fucsovics  got off to a solid start by breaking Rublev’s serve in the opening minutes to take a 3-1 lead. The 22-year-old Russian reduced the deficit to tie the match at 3-3 before again losing his serve in the next game.

Rublev disrupted Fucsovics’ plans to serve for the set by returning the break at the end of the set and stretching it into a tie-break, but failed to get the upper hand allowing his Hungarian rival to win the match-opener 7-6.

The 13th-seed Rublev struggled at the beginning of the second set, immediately losing his serve with Fucsovics creating a solid 5-2 lead. But the Russian proved that he is one of the most tenacious players in the men’s tour, producing a stunning comeback by winning four games in a row to seal a 7-5 win and tie the match at one set apiece.

With a flick of the wrist, @AndreyRublev97 may have just delivered one of the best points of this match 👏#RolandGarros pic.twitter.com/TXCicyKETg

The beginning of the third set mirrored the second one with Rublev again losing his serve right form the start, but this time around he didn’t allow the unseeded Hungarian to build a significant lead, immediately breaking him to make the score 3-3.

The players exchanged breaks before Rublev scooped two straight games to seal the victory in the third set 6-4.

Rublev broke his tradition of losing serve in the beginning of each set as both players confidently holding their serves in the fourth set, with another tie-break deciding the winner of the set and as it turned out the winner of the match as well.

Rublev dismantled his opponent 7-3 in the tie-break to book a ticket in his first ever French Open quarterfinal.

In the next round Rublev will face the winner of the tie between Bulgaria’s Grigor Dimitrov and Stefanos Tsitsipas of Greece. 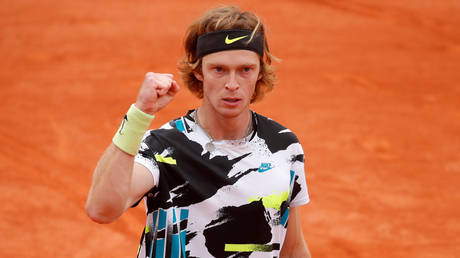