Russian contender Vadim Nemkov continued his perfect run of results as a Bellator fighter with a stunning second-round TKO finish of two-division champion Ryan Bader to win the light heavyweight title at Bellator 244.

Nemkov battled with Bader through a well-contested opening round, with the Russian looking the better man in the striking exchanges.

But Nemkov’s striking advantage really paid off in Round 2, when he landed a huge head kick that dropped the American champion.

Seeing his chance to score a career-defining finish, Nemkov swarmed his opponent and unleashed a non-stop barrage of ground strikes.

Remarkably, Bader tried gamely to battle back to his feet, but despite somehow getting back up twice, he was sent straight back down to the mat by Nemkov’s relentless salvo of strikes. And, after the second time, he was returned to the canvas, the referee stepped in and waved off the fight.

It meant that Nemkov was crowned the Bellator light heavyweight champion, as he avenged the 35-second knockout defeat his mentor Fedor Emelianenko suffered at the hands of Bader in the Bellator heavyweight grand prix last year.

Now Nemkov, whose record stands at 13-2 for the career, will look to continue his perfect run as a Bellator fighter, with all five of his fights for the American promotion producing victories. 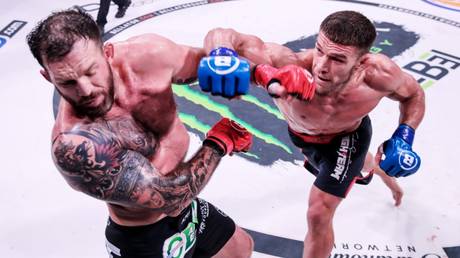