‘An all time Loew’: German fans turn on coach Joachim Loew after 6-0 HUMILIATION by Spain

‘An all time Loew’: German fans turn on coach Joachim Loew after 6-0 HUMILIATION by Spain

There is a growing sentiment among German football fans that longtime coach Joachim Loew may have outstayed his welcome in the national team dugout after his side suffered a humiliating 6-0 reverse to Spain on Tuesday.

Questions are being asked as to Loew’s status in German football’s top job after his team were eviscerated by a rampant Spanish outfit in the pivotal Nations League fixture, with Manchester City’s Ferran Torres bagging a hat-trick and Alvaro Morata, Rodri, and Mikel Oryazabal also hitting the back of the net in what was the national team’s worst-ever defeat in a competitive game.

Loew, who has been in the job since 2006, has come under fire recently for what fans are describing as several recent sub-par performances.

His side was unable to overcome 10-man Switzerland last month, and also dropped points in their home fixture against Spain, as well as in the first fixture against the Swiss.

It was six of the best. Spain were majestic, Germany absolutely abject, they were all over the place. I can’t remember ever seeing a German team lose 6-0, Joachim Low must be living on borrowed time surely. They’ve been dreadful since 2018 World Cup. Awful

After the dust had settled, Loew received an iteration of the dreaded “vote of confidence” from national team director Oliver Bierhoff, who stated that the capitulation against Spain isn’t going to impact Loew’s position.

“This game changes nothing. We still trust Joachim Loew, no doubt about that,” he said.

“With the national team, you have to think and analyze from tournament to tournament. We want to achieve the maximum at next year’s Euros.”

However, if Loew has the backing (for now, at least) of German football officials, it seems that he is losing the support of sections of German fans smarting from the glut of goals their team shipped on Tuesday evening.

Spain have destroyed Germany 6-0, It’s safe to say that Germany have reached an all time Löw. pic.twitter.com/rGSqicFTdj

Stunned by how bad Germany were. To have that level of individual quality available and to misuse it to that degree beggars belief. Have always believed Löw had earned one last crack at a tournament, but unless he changes course, they won’t get out of Euros group. #ESPGER

I wish I had the same job security as Joachim Löw 😭 pic.twitter.com/vsGFVPSzM2

The loss to Spain doesn’t appear to be an isolated incident, with some suggesting that the current downturn in form extends as far as the 2018 World Cup in Russia, where Loew’s team suffered defeats to South Korea and Mexico in the group stage, forcing the former World Cup winners into the ignominy of an early trip home.

Joachim Loew should been sacked after World cup in Russia

Löw has World Cup champions and UCL champions as his disposal and still he’s making them look like part time sailors.

For God’s sake, when are they going to fire Löw.

So, with the pressure firmly on Loew ahead of next summer’s delayed UEFA European Championships (where they are paired in a tough group with France, Portugal and Hungary), it seems as though the inquest into Loew and his team is set to intensify.

And with his job surely on the line, Loew has no room for error.

Best case: Knocked out in the first round after escaping the group as one of the best third-placed teams.

Either way, this is how Löw’s time in charge ends. Focus is more about the players who establish themselves as key for Qatar and home Euros. https://t.co/Io9TTxGE45 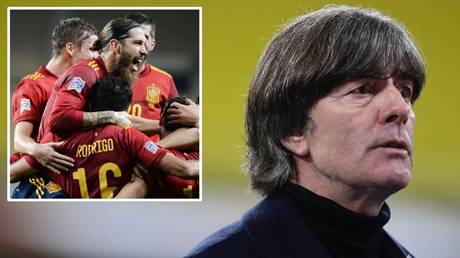