American prodigy Christian Pulisic scored an emphatic finish five minutes after coming on as Chelsea cemented a Champions League qualification place with a 2-1 victory at second-bottom Aston Villa in the Premier League on Sunday.

Chelsea scored twice in three minutes to come from behind and edge past relegation-threatened Aston Villa to move five points clear of Manchester United in fourth.

The Blues had United States international Christian Pulisic to thank for their victory as he finished powerfully to draw Chelsea level. Then, with Chelsea’s confidence soaring, Olivier Giroud’s close-range strike put them into a lead they never relinquished.

Midfielder Pulisic, who became the most expensive American signing of all time when he joined from Borussia Dortmund for $73 million last year, finished from Cesar Azpilicueta’s left-wing cross to draw Chelsea level on the hour after Kortney Hause had given the hosts the lead against the run of play two minutes before half-time.

Giroud scores to give Chelsea a 2-1 lead 🔥🔥🔥#AVLCHE

Azpilicueta was also the provider for Giroud’s 62nd-minute winner as the back-in-favor World Cup winner received the Chelsea captain’s pass inside the penalty area and fired in a low shot that was deflected into the net.

United’s draw at Tottenham on Friday night meant that Frank Lampard’s side had the opportunity to pull clear in the Premier League’s Champions League qualification places, although they needed the help of Pulisic as they struggled to break down Villa’s defense after going a goal behind.

The 21-year-old replaced England star Ruben Loftus-Cheek after the break and was quickly involved in a turnaround that leaves them three points behind third-placed Leicester.

Villa captain Jack Grealish, who had been in the headlines for breaching lockdown rules during the division’s suspension of more than three-months, endured a frustrating afternoon, clashing with Chelsea defender Antonio Rudiger in the final minutes and receiving a yellow card for a late challenge.

The result left Villa a point from safety with eight matches remaining and without a win since January after losing six of their last seven Premier League matches. 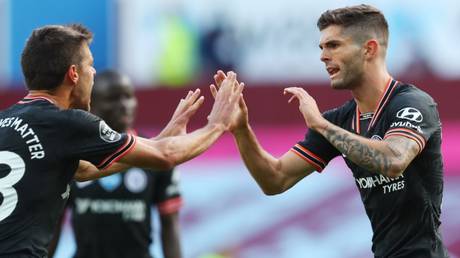