Four months after Paris Saint-Germain striker Neymar slapped Alvaro Gonzalez and accused the Marseille star of racist remarks that he was cleared of, the feuding pair have clashed again after PSG triumphed in the French Super Cup.

Brazil striker Neymar could not resist taking to Twitter to gloat after helping new manager Mauricio Pochettino to his first trophy at Paris, goading Gonzalez with a message celebrating his 85th-minute penalty in the 2-1 win.

Gonzalez, who was not found guilty by the French Football Federation when Neymar accused him of racism after being sent off for slapping him in a match last September, hit back.

“My parents always taught me to take out the trash,” wrote the defender, accompanying his retort with a picture of himself grabbing Neymar by the head during a physical tussle between the pair during the showpiece.

When Neymar replied by mocking Gonzalez for failing to secure the silverware, the Spaniard produced a picture of Brazil legend Pele, arguing that Neymar would always be in the “eternal shadow of the King.”

The world’s most expensive player duly retaliated: “And you mine. I made you famous – you’re welcome.”

Neymar had made a triumphant return from an injury layoff when the spat reopened, entering from the bench for the final 25 minutes.

Neymar was in good spirits after scoring on his return from injury 😀 pic.twitter.com/Ok0PaVQnOW

❤️💙 @neymarjr returns from injury and hits the winner as PSG beat arch-rivals Marseille to lift the Trophée des Champions. Then his beloved @SantosFC reach the #Libertadores final for the 1st time since he inspired them there in 2011 🤍🖤

The 28-year-old had a notable impact during his cameo appearance, ending the contest as the game’s most fouled player and finding the net from the spot late on.

He was in a provocative mood after the full-time whistle, also taunting Dmitri Payet in response to a joke the Marseille goalscorer had made after Paris lost the Champions League final to Bayern Munich last year.

Supporters concerned by the perennial rumors of Neymar’s return to former club Barcelona would have been encouraged by the sight of the playboy kissing the PSG badge on his shirt.

The French giants are known to be keen to seal a contract extension with their talisman, and Neymar is understood to be happy at the club and on the verge of agreeing to stay.

“He’s a special player and I’m very happy for him,” said Pochettino, who succeeded Thomas Tuchel earlier this month.

“He scored the winning goal and I’m happy with the overall performance of my team, who had a good game.” 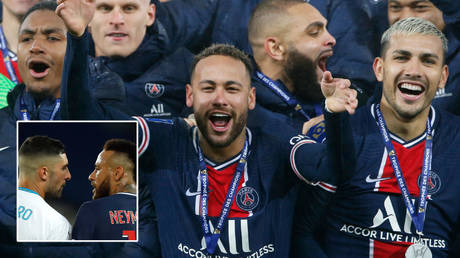