‘Already got invited to the bubble’: Instagram model claims season ‘DEFINITELY ending early’ after NBA player ‘asks her to visit’

‘Already got invited to the bubble’: Instagram model claims season ‘DEFINITELY ending early’ after NBA player ‘asks her to visit’

An Instagram model says she is “in trouble” for admitting that she wished Utah Jazz star Donovan Mitchell had been the unnamed player who invited her to the NBA bubble at Disney World Orlando, risking a breach of team quarantine.

Anna Mya, a Mexican gamer with a penchant for posing in revealing outfits on social media, claimed that a player had already flouted the tight quarantine rules surrounding the proposed return of the NBA by inviting her to visit the bubble created for teams at Disney World.

Fans responded by accusing the Los Angeles-based basketball lover of betraying confidences and putting the restart of the NBA season at risk, only for the starlet to cause an even greater stir by replying to one who suggested her suitor was Utah Jazz point guard Donovan Mitchell: “Sh*t, I wish it was him.”

In her original tweet, Mya bragged: “I already got invited to the bubble. Yeah, the season is definitely ending early.”

I already got invited to the bubble. Yea the season definitely ending early. 😭😭😭

After her claim caused uproar, she warned that the response could lead to her being “uninvited” by the player and posted a series of purported messages with a friend in which she was advised to block the star from seeing her messages, having asked her confidante: “Oh my god, should I delete [the tweet]? It’s going viral and he might see it.”

She also complained: “Sports pages are messaging my friends trying to find out who it is. They are literally dissecting my Instagram page looking for clues.”

Friends, families and guests will not be able to enter the bubble until the second round of the playoffs as bosses bid to end the season and minimize the risk of COVID-19 outbreaks among teams.

Mya later seemed to dismiss suggestions that she would reveal the player’s identity by saying: “You all keep saying I’m going to fumble the bag.

Sports pages messaging my friends tryna find out who it is. They literally dissecting my IG page looking for clues. 😩 I feel like this is somehow all your fault 😂

Y’all keep saying I’m going to fumble the bag. Me & him are laughing at this shit right now. 😂😂😂 reading all the comments crying 😭😭

People calling me a snitch like it’s not known that they can have visitors in like 5 weeks. Well technically I didn’t know either until I got the invite 😂😂😂😂😂

“Me and him are laughing at this sh*t right now. Reading all the comments crying.

“People calling me a snitch like it’s not known that they can have visitors in five weeks. Well, technically I didn’t know either until I got the invite.”

As fans tried to deduce who the player was by looking at which players Mya followed on social media and going through her Instagram photos, which she later locked, Orlando Magic center Mo Bamba joked that Mitchell was already finding life in isolation difficult.

She denied the player was LA Clippers center Montrezl Harrell, who follows her, but aroused suspicions by casually calling Harrell “Trez”.

Cynical readers questioned Mya’s motives. “She got invited and went straight to Twitter,” wrote one, while another referenced Michael Jordan’s recent revelations about the debauchery he witnessed when he first joined the Chicago Bulls by saying: “People think the NBA hasn’t already planned for dudes flying in girlfriends and others.

Ppl that think the NBA hasn’t already planned for dudes flying in girlfriends and others. Clearly don’t understand how no one knew about the bulls coke train till MJ referenced it in documentary 35 years after the fact 😂😂😂😂😂

“They clearly don’t understand how no-one knew about the Bulls…until MJ referenced it in a documentary 35 years after the fact.”

The NBA, which is aiming to resume the season on July 30 after a suspension since March 11, confirmed on Monday that two players at Disney World had tested positive for the coronavirus since arriving in Florida.

A total of 322 players have been in the bubble since July 7. 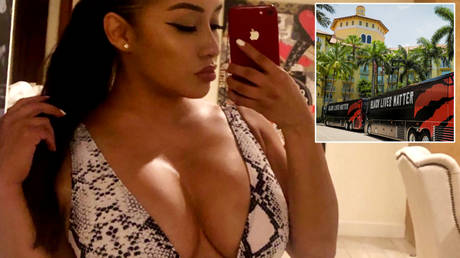