Close
Trending News
HomeSportAll or nothing: Emelianenko could retire or target title in one last fight, opponent claims ahead of MMA legend’s Moscow return

Fedor Emelianenko, the man considered by some to be the greatest MMA heavyweight ever, will return to action after an absence of almost two years in Moscow on Saturday – and his American opponent feels it could be his last fight.

The formidable 45-year-old headlines Bellator 269 at the VTB Arena, making his comeback on home soil in his first fight since his first-round win over Quinton ‘Rampage’ Jackson in Japan in December 2019.

As well as the debate over whether the storied powerhouse is the sport’s best ever at his weight, conjecture over when ‘The Last Emperor’ will make his last outing continues to swirl, with the evergreen Emelianenko seemingly expecting this to be his penultimate bout.

Emelianenko appeared to jovially hint that he would like to fight again in Chicago before retiring, although that could depend on his success against Johnson, who spent almost three years with the UFC and won four of his seven fights with the promotion before joining Bellator.

First faceoff from #bellatormoscow between Fedor Emelianenko and Tim Johnson

“I feel proud being here, representing Russia,” said Emelianenko, adding that he did not expect Russian president Vladimir Putin – a longstanding fan of his – to attend the fight because of the increased complications around attending events during the pandemic.

“I’ve spent my whole life doing this sport. MMA is the most joyful job there could be.

“Tim Johnson had a winning streak going on, which shows that he’s quite a good fighter. “

The legacy of Fedor Emelianenko was cemented long ago but rose to new heights in the #Bellator cage.

That sequence of victories ended for Johnson when he lost to Emelianenko protege Valentin Moldavsky in a heavyweight title fight in the US in June.

Asked whether he considered bouts with ex-UFC fighters such as Alistair Overeem and Junior Dos Santos, Emelianenko explained: “Dos Santos had a serious streak of losses and left the UFC.

“I don’t think it would be very suitable to fight him, compared to Tim Johnson. Bellator came up with a bunch of options and Tim was an obvious choice.”

An enthusiastic visitor to Russia, Johnson says there is “nothing else to do” but enjoy the occasion as he aims to inflict a seventh defeat in 47 fights on his revered opponent – and avoid providing Emelianenko with a 31st early win.

“Very few people are going to have this experience in their lifetimes,” he reasoned. “A lot of people look at me and I don’t pass the eye test. I don’t look like someone who’s dangerous or athletic; I just look like some Joe Schmo they’ve got out of the crowd.

“I’m pretty low on the name power list: people know me but not many fans think of me as a big name power kind of guy. If Fedor beats me, this is definitely not going to be his last fight. If I win, it might be – I don’t know.

“If it’s going to be his last fight, a lot of fans were hoping it would be against another power guy, another legend. But looking at it from his shoes, I’m right up there on the list. If he gets a win over me, he potentially gets the chance to fight for the belt again.”

Currently ranked only behind Moldavsky and Ryan Bader, the American who Emelianenko lost to in his title challenge in January 2019, Johnson does not anticipate the Russian’s lay-off affecting his performance.

“He has enough experience, enough fights – I don’t think some time off is going to hurt him at all,” he said, admitting that he had been somewhat starstruck when the contest was announced in June.

“If you allow yourself to, you can probably get wrapped up in that [hype]. Initially after the fight was announced, for the first couple of weeks, it was ‘I’m fighting Fedor’.

“I didn’t 100% focus on the fight, but for the last month or so [I’ve realized] this is a fight, this is what I get paid to do and this is for mine and my family’s future. Fedor is just an opponent who is in front of my goals.”

Emelianenko almost signed for the UFC several times, becoming PRIDE champion and starring for Strikeforce and M-1 before joining Bellator in 2017. 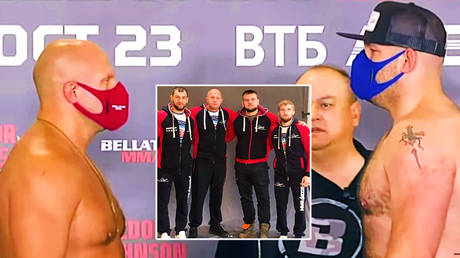 Is Snapchat down? How to check if app is not working