‘All lives matter,’ says Russian ex-UFC heavyweight Taktarov as he extols virtues of upside down exercise in bizarre VIDEO

‘All lives matter,’ says Russian ex-UFC heavyweight Taktarov as he extols virtues of upside down exercise in bizarre VIDEO

Russian former UFC heavyweight Oleg Taktarov has proclaimed “all lives matter,” while hanging upside down and singing the praises of gravity-defying abdominal crunches.

As his online following will know, former MMA figther-turned-actor Taktarov is a colorful presence on Instagram, posting everything from throwback fight clips to health and well-being tips.

On this occasion the 52-year-old donned a pair of ‘gravity boots’, suspending himself upside down from a metal bar before raising his body upwards in a demonstration of strength.

In the commentary accompanying the clip – which is set to the tune of Johnny Cash’s ‘Personal Jesus’ – Taktarov is heard espousing the values of exercising while suspended by your feet, with the clip also showing him lifting a nearby log to increase the load.

The clip concludes with the former fighter proclaiming “Every life matter[s],” in apparent reference to the protests around the globe in the wake of the death of George Floyd.

Taktarov picked up on the theme in the text accompanying the clip, writing in a mix of English and Russian: “Everybody’s life matter!

“I have 3 sons and each has 50% different blood… There are Russian, Caucasian mountains, Black, Cherokee, Spanish…. Which should I love more?”

Adding further to his unique take on events, Taktarov then turned to the case of Hollywood legend Marlon Brando sending Apache actress and activist Sacheen Littlefeather to decline his best actor award for ‘The Godfather’ in 1973.

“This is for the same reason why Marlon Brando expressed his opinion through the Native American girl at the Oscars,” the former MMA fighter wrote.

Taktarov lays claim to the title of Russia’s first-ever UFC champion, having won UFC 6 back in 1995, later switching to acting and appearing alongside the likes of Harrison Ford and Will Smith in Hollywood blockbusters, typically in a role as hired Russian muscle.

In May he also called out Mike Tyson for a fight, as the former world heavyweight boxing champion prepares for his much-anticipated comeback. 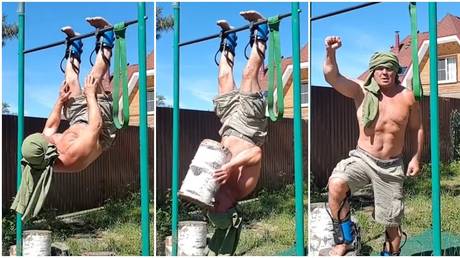