‘All just a cover-up’: Conor McGregor makes WILD CLAIM about health of Khabib’s dad as Irishman responds to coronavirus jibe

‘All just a cover-up’: Conor McGregor makes WILD CLAIM about health of Khabib’s dad as Irishman responds to coronavirus jibe

Conor McGregor has responded to a Covid-19 barb from the cousin of Khabib Nurmagomedov by making cover-up claims over the health of the UFC lightweight champion’s father.

Welterweight fighter Abubakar Nurmagomedov took a pop at the Dubliner on Instagram on Tuesday, posting an image of him gasping for air during his fourth-round submission defeat at the hands of Khabib back in 2018.

“When it’s coronavirus and you can’t breathe,” read the accompanying caption in Russian.

The post was taken with humor by the likes of Khabib’s manager Ali Abdelaziz, who responded with a series of laughing emojis.

But the coronavirus reference comes as Khabib’s 57-year-old father and trainer Abdulmanap remains in intensive care in a Moscow hospital after suffering a stroke brought on by a Covid-19 infection.

That was picked up on by McGregor, who had previously offered his best wishes to the Nurmagomedov family over Abdulmanap’s health struggles, but on this occasion claimed that Abubakar’s jibe using the deadly disease must mean that the whole thing was a cover-up.

“I figured it was all just a cover up about Abdulmanap,” McGregor wrote in the replies, suggesting that the health scare was simply a ruse for Khabib to avoid fighting.

“A cover up to hide the lack of activity and the pulling out of fights and running away. Good luck but remember – Allah sees all!”

McGregor and Abubakar Nurmagomedov have had previous run-ins, physical and verbal.

The pair clashed in the octagon at the T-Mobile Arena back in 2018 in the carnage that ensued when Khabib vaulted the cage following his victory.

After Abubakar Nurmagomedov suffered defeat in his last octagon outing in Moscow back in November, McGregor was quick to taunt him on social media, labelling him “forever a failure.”

Giving an update on his father Abdulmanap’s health this week, Khabib said the respected MMA trainer remains in a serious condition, but that the pair communicate on a basic level when the Dagestani fighter makes his now daily visits to the Moscow military hospital where he is being treated.

The unbeaten 155lbs king also said he is continuing to train intensely and was targeting an autumn return to defend his title against interim champion Justin Gaethje.

McGregor, meanwhile, is supposedly retired from the sport after announcing earlier this month that the fight game “no longer excited” him.

The statement has been treated with skepticism seeing as it’s the third of its kind in the past four years, although one thing for certain is that the Irishman has lost no interest in combat of the digital sort. 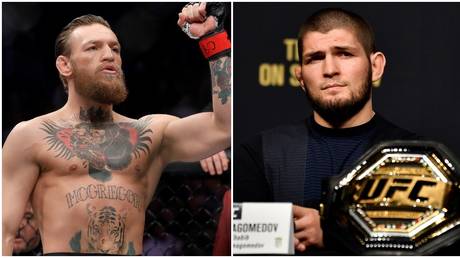