Sublime Alexander Zverev fell to his knees after dominating below-par Russian rival Karen Khachanov in the men’s singles tennis final at the Tokyo 2020 Olympics, becoming the first German man to win individual gold at the Games.

A run of seven straight successful games in the middle of the match all but ended world number 25 Khachanov’s challenge and handed US Open finalist Zverev a 6-3, 6-1 victory to seal the title following a statement win over world number one Novak Djokovic in the semifinals.

Zverev admitted that it had seemed “impossible” to beat all-time great Djokovic, and he made his task in the final look significantly easier than that description, needed just 79 minutes to storm to gold.

Khachanov, who had described winning a medal as “one of the dreams come true” following his straight sets victory over Carreno Busta in the final four, ended a fine campaign with silver.

The Moscow-born Wimbledon quarterfinalist had won his two most recent previous encounters with Zverev, but found himself up against an opponent on top form in the decider.

In the bronze medal match on Saturday, Busta beat Djokovic in three sets to send the Serb superstar home empty-handed. 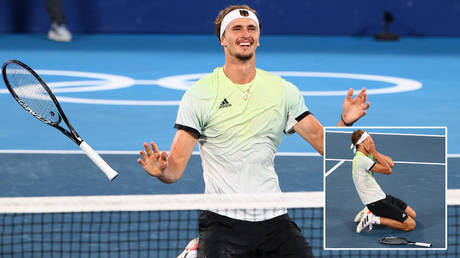