A heavyweight showdown with distinct world title implications between Alexander Povetkin and Dillian Whyte has been set as the headliner of the last of a sequence of fight cards taking place in Eddie Hearn’s back yard in August.

Borrowing a trick from his UFC equivalent Dana White, Hearn had tasked himself with finding a way to oversee the return of top-level boxing from its self-imposed coronavirus hiatus without contravening health and safety regulations put in place amid the ongoing pandemic.

While White came up with “Fight Island” in Abu Dhabi, Hearn’s version is a little closer to home than that – quite literally.

The Matchroom Boxing chief had previously announced plans to hold boxing events in the back yard of his property in Essex in south east England, and on Friday he finally revealed details of the ambitious move.

Four fight cards will take place between August 1 and August 22, with each being held on consecutive weekends. Much like the UFC events which have taken place post-lockdown, no fans will be permitted to attend the fight cards.

Felix Cash and Jason Welborn top the bill in the third event, but the fourth card appears to be the jewel in the crown and will be headlined by a fight between Dillian Whyte and Alexander Povetkin, the winner of which will move a step closer to contendership for a recognized world title.

Ireland’s dominant world champion Katie Taylor will also compete on the final fight card. Her opponent is expected to be Amanda Serrano or Delphine Persoon – the gritty Belgian defeated by Taylor last summer when she unified all of the titles in the lightweight division.

The venue for the fights, which is known as Mascalls, was once the Hearn family estate but has since been converted into the headquarters for Matchroom Boxing. The venue will receive another facelift as it prepares to host the first boxing event in the UK in more than three months.

Hearn, however, isn’t confident that the move will be a lucrative one, admitting that he expects the four fight cards to be a “financial disaster” but says that sacrifices must be made in order to maintain the momentum of boxing. 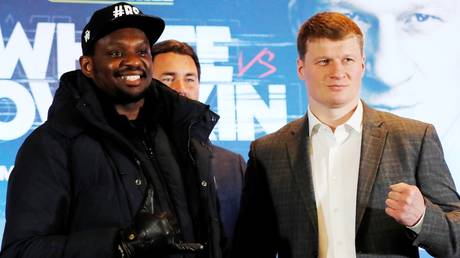