Jorge Masvidal showed that his “threepiece and a soda” line was more than just a catchphrase as he treated himself to a bounty of fast food just weeks out from his world title fight against UFC welterweight kingpin Kamaru Usman.

Masvidal, who infamously treated UFC rival Leon Edwards to his very own helping of a threepiece and a soda backstage after an event in London a couple of years ago, has long been known as a fast food connoisseur and doubled down on the reputation in a video released to social media which showed the top-ranked UFC welterweight contender ordering a drive-thru meal less than three weeks out from the biggest fight of his professional career.

Jorge Masvidal has always fueled up on McDonald’s and camp for #UFC261 is no different 😏🍔 (via @GamebredFighter) pic.twitter.com/Avn0a8z6Bz

‘Gamebred’ once again challenges Usman for UFC gold on April 24 in a fight which comes less than a year after the champion dominated him en route to a lopsided unanimous decision win on ‘Fight Island’ last summer.

“A lot of people still be asking me what’s the secret,” Masvidal says in the brief video after ordering his fast food feast. “Ain’t sh*t changed, man,” he adds before devouring a double cheeseburger.

Masvidal hit the headlines in advance of that fight by posting a picture of him holding a slice of pizza on his flight to Abu Dhabi, which prompted speculation that the fighter – who had accepted the bout on just six days’ notice – wasn’t taking the fight as seriously as he should have, with talk growing from a whisper to a roar when the welterweight veteran appeared to struggle on the scales on the eve of the fight.

And now Masvidal has appeared to open the door to further criticism after posting the video online of his latest culinary adventure.

This is why he’s gonna lose. Doesn’t take this fight seriously.

Eating poorly like it is cool is just the opposite. When you are a pro and you are getting paid to fight, you should treat your body like a temple. The fans deserve 100% from @GamebredFighter and eating MD is not 100%. You make enough money to fuel your body appropriately. 💪🏼

“This is why he’s gonna lose. Doesn’t take this fight seriously,” suggested one fight fan in response to the clip, while another said that the video is evidence that the challenger isn’t taking the forthcoming title fight at UFC 261 as seriously as he should.

“When you are a pro and you are getting paid to fight, you should treat your body like a temple. The fans deserve 100% from [Jorge Masvidal],” they wrote.

A third wrote on Twitter that their faith in Masvidal’s ability to trouble the dominant Usman, particularly if his diet and nutrition isn’t being taken seriously, has been hit and that it is making them question if they should purchase the pay-per-view.

“Ah good, so there’s no need to buy the PPV and watch Kamaru handle him again then,” the fan chimed in on social media.

On his way to Fight Island, Jorge Masvidal stopped in Rome for some pizza 😂 #UFC251

The wave of criticism levied Masvidal’s way matches that of his pre-fight pizza last year when the fighter was pictured with a large pizza en route to Abu Dhabi which he purchased in Rome whilst his private jet re-fueled.

His fondness for fast food was also apparent following his ‘BMF’ title win against Nate Diaz 18 months ago when he scoffed a slice of pizza in the post-fight press conference deep in the cavernous halls of Madison Square Garden.

And the fighter had best be wary of inviting further criticism of his nutritional habits just days out from his second showdown with welterweight wrecking machine Usman, lest the ‘Nigerian Nightmare’ serve up a three piece and a soda of his own when the pair square off in front of a packed house in Jacksonville, Florida later this month. 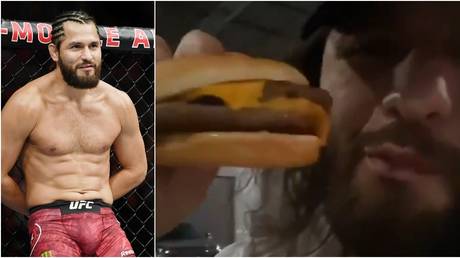