Emma Jones, the popular football presenter known for her model looks and tight outfits, has shared the perverse extent of fans’ comments online.

Jones, who is a Premier League and Leeds United presenter, boasts over 500,000 followers across social media and took to Instagram to share the latest correspondence from oddballs unable to control their urges.

“Ah, internet,” she wrote, to caption screenshots of a tweet and another response to one of her stories.

The first was a post of hers on Twitter, where Jones innocently professed her love for peanut butter.

Declaring that eating the spread “straight off a spoon is honestly one of the best things in life”, Jones was creepily told that “licking it off your naked body would be better”.

Another said licking it “off her sweaty feet” would be “WAYYYYYY” better still, while one kind gentleman politely asked if he could “please sniff your dirty sweaty toes” in reference to an Instagram story of Jones working out.

Slapping vomiting emojis on the latter set of pearlers, this is nothing new for Jones.

In January, she told of how she’d only “managed to get three hours into lockdown before being sent an unsolicited picture of a penis on social media”.

But for every unwelcome outburst from strange men, there are always plenty of good eggs that offer their support.

“You should name, shame and report them,” said one Leeds supporters at the time.

And back to peanut butter, the majority of fans respectfully engaged Jones with their own brand recommendations and snack tips. 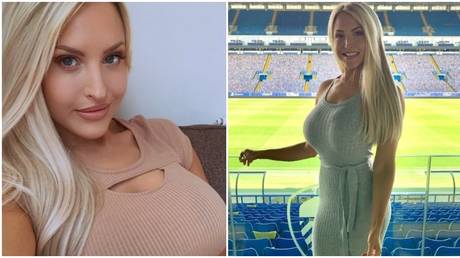