Billionaire businessman and former Formula 1 boss Bernie Ecclestone has become a father for the fourth time at the age of 89 after wife Fabiana Flosi, 44, gave birth to a baby boy, according to reports in Switzerland.

Flosi delivered the youngster in the Swiss resort of Interlaken on Wednesday with the couple naming the newborn ‘Ace’, according to Blick.

Ecclestone told the news outlet that mother and baby are “doing well,” speaking of his pride at the addition of a boy to join his three daughters from previous marriages.

Flosi told the outlet: “It all went so smoothly. The birth was over after 25 minutes. Thank God!”

The ageing lothario is on his third wife, having previously been married to Ivy Bamford and Croatian model Slavica Radic.

He has three daughters, the eldest of whom is Deborah, 65, while middle child Tamara is a frequent tabloid headliner maker in her own right in the UK.

On announcing the news of Flosi’s pregnancy earlier this year, fans reacted with both awe and bafflement at the octogenarian’s continued bedroom prowess.

Despite his advanced years, Ecclestone is still some way off the man believed to be the world’s oldest father, Indian Ramjit Raghav, who supposedly fathered a child at the age of 96 before dying earlier this year.

Ecclestone presided over the F1 empire as chief executive for 40 years before stepping down in 2017, and is estimated to be worth upwards of $3 billion.

He wed Brazilian lover Flosi back in 2012, crowing earlier this that he had been putting in “plenty of practice” before she became pregnant.

“There’s nothing that unusual is there? I haven’t had a job for a little while so I have had plenty of time to practice!” the diminutive business billionaire said.

Ecclestone has been in the headlines again in recent days for his comments on the Black Lives Matter movement, asserting in an interview with CNN that “in many cases, black people are more racist than what white people.”

The statement was swiftly criticized by Formula One bosses as well as reigning world champion Lewis Hamilton. 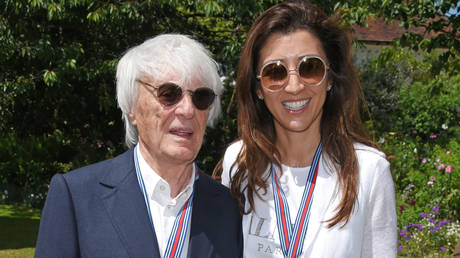 PS5 UK stock updates – Argos and GAME could sell Playstations TODAY’ plus how to get consoles at Currys, Very and Smyths