Close
Trending News
HomeSportAfter the embarrassing scenes with Evander Holyfield, even money-grabbing Triller have realized there’s no profit in shame

After the embarrassing scenes with Evander Holyfield, even money-grabbing Triller have realized there’s no profit in shame

After the embarrassing scenes with Evander Holyfield, even money-grabbing Triller have realized there’s no profit in shame

Triller’s latest attempt at boxing nostalgia was condemned on all sides as ring veteran Evander Holyfield was shellacked in Florida last weekend, and has forced its chief into a change of tack – and not a second too soon.

There’s an old saying in the fight game which states that all is fair in love and fight promotion. Triller, the social media group which recently moved into boxing promotion, has done all it can to test the limits of that particular maxim.

The warning signs were there. When it was announced by the group that Evander Holyfield was to fill in for fellow fight veteran Oscar De La Hoya against the 44-year-old former UFC fighter Vitor Belfort, it was met with mostly ignominy from the sports press.

Why was this near senior citizen being plucked from retirement on a week’s notice to step into the ring with a man who, despite his own advanced age, was 14 years Holyfield’s junior?

The California Athletic Commission, which had previously rolled out the red carpet for the De La Hoya-Belfort fight, subsequently withdrew its support and prompted Triller to dash across the country to Florida – a state known for being the Wild West when it comes to combat sports regulation.

And while this story doesn’t exactly have the type of tragic end that some were predicting, the image of seeing Holyfield’s reanimated corpse being shuddered by clubbing blows from Belfort en route to a – thankfully – first-round stoppage was about as depressing a swan song as anyone could have feared for the former heavyweight and cruiserweight champion.

“At the end of the day, what we want to do at Triller Fight Club is to put on professional fights,” Triller chief operating officer Thorsten Meier told Yahoo Sports of his company’s proposed change of tack less than a week removed from Holyfield vs. Belfort.

“We are stepping away from exhibition stuff only. Yeah, Tyson was great and whatever [in last year’s fight with Roy Jones] and got the biggest pay-per-view, whether it was because of the pandemic or whatever.

Meier, who has worked in the past with both Klitschko brothers and multiple-time world champion Gennady Golovkin, appears to have just about as bad a taste in his mouth from last weekend as the rest of us – but perhaps it is slightly naïve to say that this about-face is strictly down to the memory of Holyfield plodding around the ring for less than a round a few days back, and more to do with the financial bottom line.

Per sources, #HolyfieldBelfort event totaled about 150k PPV buys between linear & digital platforms, which would make it a massive $ loser for Triller. At 150k it would gross about $7.5M from ppv, not remotely close to covering even the purses, not to mention rest of expenses.

As noted by boxing journo Dan Rafael, Triller’s latest fight card appeared to be a disaster in all areas and wasn’t buoyed by the addition of UFC stars Anderson Silva and Tito Ortiz facing each other, for some reason or another, in a boxing match, nor the comeback that fight fans didn’t know they wanted (and still don’t) from David Haye.

Per Rafael, the card generated just $7.5 million in pay-per-view sales –  a sum which places the event at huge financial loss (and even more-so when you consider the “obscene” amount of money that Donald Trump was supposedly paid to provide ringside commentary).

And while ethical concerns as to the legitimacy of last weekend’s card were apparent from all quarters, Meier stuck to his guns. Holyfield was fine, he said, but his original comeback opponent Kevin McBride wasn’t.

“There is a greater conversation that could be had talking about ethical and non-ethical and whatnot, but I would never put anyone in the ring if there were any concerns about them mentally, medically or physically,” Meier explained.

“We are the ones who had concerns about McBride. We did everything in our power to make sure that McBride fight didn’t happen because we were concerned that something would happen in the ring.”

Meier added that Triller will promote next month’s undisputed lightweight title fight between Teofimo Lopez and George Kambosos, something which is a far cry from retired fighters and boxing/MMA crossover bouts in a fight which they presumably hope will go some way to legitimizing them as a player in global boxing.

To some though, the reputational damage is already done. Evander Holyfield is one of the most beloved figures in heavyweight boxing history and Triller was only too happy to make a quick buck at his expense. California wanted no part of it, but Florida quite obviously did.

Fighters are always going to want to fight and it doesn’t come easy for a pugilist to admit that the task in front of them is too steep. That’s Triller’s job. That’s the Florida commission’s job.

Instead, this lust for combat nostalgia has exposed the limits of Triller’s cash grab for all to see.

And judging by their bottom line, there were absolutely no winners whatsoever. 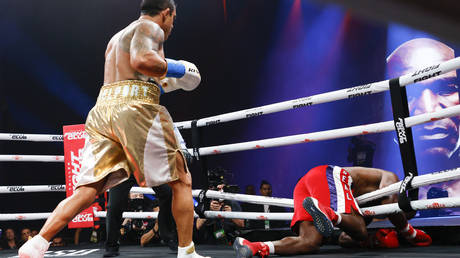 ‘I won’t let myself be surprised a...

Is TikTok down? How to check if th...