After Erdogan scandals & racism rows, Mesut Ozil is facing yet another crossroads. Can the £350K-a-week star ever recapture form?

After Erdogan scandals & racism rows, Mesut Ozil is facing yet another crossroads. Can the £350K-a-week star ever recapture form?

Kicking his heels on the Arsenal substitutes’ bench, Mesut Ozil seems further than ever from rekindling the form which made him one of football’s great playmakers. Why has it all deteriorated so badly for the World Cup winner?

Ozil has not played a single minute of football since the restart from the coronavirus shutdown.

Dropped from the squad entirely for Arsenal’s first match back against Manchester City, Ozil did not emerge from the bench for subsequent games against Brighton and Southampton.

The former German international missed the FA Cup tie against Sheffield United with a minor back injury at the weekend, which is also believed to have ruled him out of the Gunners’ 4-0 Premier League win against Norwich on Wednesday.

Having had a strong run of games leading up to the coronavirus-enforced break, Ozil now appears back at square one – with questions over his commitment and future at a club where he still picks up a reported £350,000 a week (US$440,000) on a contract which runs until the summer of 2021.

“I’m expecting a player that is not playing to feel hurt and disappointed,” said Gunners boss Mikel Arteta this week, appearing to lay down a challenge for Ozil before he can consider any return to the team.

“Everybody that I have in the squad, my job is to get the maximum out of them and to try and help them and support them.

“And if they are willing, everybody is welcome. I always hope that the players want to give their best.”

Frequently snubbed under the uninspiring, short-lived reign of Unai Emery, Ozil was handed a clean slate under Arteta – a man he knows well from playing alongside him in the Arsenal midfield for three years under Arsene Wenger.

But despite Ozil initially being given more opportunities after Arteta was appointed in December, the Spaniard’s reluctance to use him since the restart signals he remains unconvinced by his value – not least as he seeks to shift his team from their languid style towards a more intense, high-pressing brand of football.

Ominously, former Gunners midfielder Paul Merson said this week that Ozil, 31, could be “one of the worst players in the world” for the new approach Arteta is seeking to adopt.

“He isn’t tracking back, chasing players, and you need him in a team where you’re getting 70 percent of the ball each week, and he’ll play…

“If he hasn’t got the ball he’s one of the worst players in the world… I’ve never seen somebody so disinterested when they don’t have the ball, but he hurts you at the other end.”

Merson’s take encapsulates the debate over Ozil’s role and future at Arsenal, with no sign that the club are willing to open talks on extending a contract which is up next summer.

Considering his gargantuan pay packet but increasingly diminishing returns – consisting of a solitary goal and three assists in 23 appearances this campaign – Ozil will be hard-pressed to find a team willing to offer similar sums if, as seems likely, he ultimately ends up leaving the Emirates.

As exasperated Arsenal fans will know all too well, the rancor over Ozil’s performances is nothing new. Indeed, it has reappeared cyclically in recent years as the German World Cup winner’s form has waned.

But Ozil’s demise, unfolding in slow-motion as he enters the latter years of his career, has distracted from the fact that this is a player once feted as among the most creative footballing forces on the planet.

From Schalke to Werder Bremen and on to Real Madrid, Ozil was one of the brightest talents of his generation, a tag which helped persuade Arsenal to pay a reported total of €50 million to lure him to London in 2013.

Ozil has since gone on to create literally hundreds more chances than any other Gunners player in that period, also providing 77 assists and scoring 44 times in just over 250 games in Arsenal colors.

Ozil has won the World Cup in that time, as an integral part of the German team that returned victorious from Brazil in 2014. He was named the national team’s player of the year five times between 2011 and 2017.

But his time with the national team came to an acrimonious, and very public, end after the 2018 World Cup in Russia, where Germany crashed out at the group stage.

Leading into the tournament, Ozil was already a target for many in the country after posing for photographs alongside Turkish President Recep Tayyip Erdogan.

Born in Gelsenkirchen to a family of Turkish immigrants, Ozil had always been held up as a positive symbol of cross-cultural diversity and integration, but that changed when he was seen smiling alongside Erdogan, an unpopular figure in Germany at a time of strained relations between the two nations.

Ozil was unrepentant, insisting that he was merely respecting the presidential office of the country of his heritage, but the die was cast which would lead to him quitting the team after the debacle in Russia.

Ozil felt he was unfairly scapegoated for that failure, citing racism in the German press and football hierarchy in a lengthy retirement post on social media.

“When we were knocked out and I came off the pitch, German people were telling me, ‘Go back to your country’, ‘Fuck yourself’, ‘Turkish pig’ and stuff like that,” Ozil would later tell The Athletic.

In a further sign of his defiance, Ozil has since grown even closer to Erdogan, who served as best man at his wedding to former Miss Turkey Amine Gulse at a lavish ceremony in Istanbul last year.

Some observers have wondered whether Ozil’s demise on the pitch reflects a broader disaffection with the West as he increasingly cultivates ties with his ancestral homeland.

That may be a stretch, but one thing for certain is that initial hopes that Arsenal would provide a sanctuary for him to rediscover his form in the wake of the German national team row have never fully materialized.

Instead, Ozil finds himself on the fringes again, contemplating where his future lies and whether he is up to the challenge of finding a way back into Arteta’s plans.

Publicly, Ozil continues to make all the right, fan-friendly noises, posting of his undying commitment to the team during his latest absence.

No matter what … #M1Ö @Arsenal pic.twitter.com/WFmNoxpGBc

Ozil’s defenders will cite disruptions not of his own making: the terrifying armed robbery attempt he suffered alongside his wife Gulse and teammate Sead Kolasinac in broad daylight in London last year; Arsenal’s overall malaise which sees them laboring down the table; and the mystery ailments which kept Ozil sidelined for spells under Emery (although detractors would point to those as being yet more indication of a willingness to pick up his hefty pay without putting in the playing time).

On his day, Ozil was – and quite possibly still is – one of the finest playmakers in the game: a man with a feather-light first touch and vision possessed by few others, a player who can change a game with a shimmy and a through-ball.

But as Arsenal fans will readily tell you, the problem is that those days have been fewer and much further between.

In the context of the brilliance he is clearly capable of, quite how far Ozil has fallen in recent years only becomes all the more stark.

Less than a month into football’s big restart, he is again facing a dilemma which could determine whether he has the will to play his way back into Mikel Arteta’s Arsenal plans, and ultimately just how and where he ends his career. 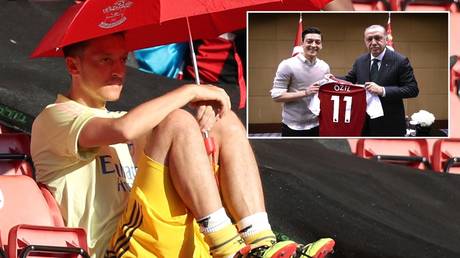 Ryan Giggs could have influenc...