He certainly didn’t have it all his own way but Jake Paul showed that his boxing apprenticeship isn’t all smoke and mirrors when he took a deserved decision win against former UFC champion Tyron Woodley in Cleveland.

The former Disney star entered the fight with the type of confidence one wouldn’t usually expect of a combat sports neophyte who had previously beaten up three men with almost precisely no boxing experience between them, but if some had suspected that the Jake Paul roadshow was a house of sand, they might be forced to rethink that in the cold light of Monday morning.

Woodley, the former UFC champion who came into the fight on the back of four straight losses in his own sport, was promoted as being a significant uptick in competition for Paul – and he no doubt was, given that he has a storied history of separating his opponents from their consciousness throughout his extensive MMA career.

Still though, throughout fight week in Ohio it was difficult to stray from the fact that Woodley was the stooge brought in to make Paul look good against a credible opponent: despite having less traditional boxing experience than his influencer opponent.

This was a risk for Team Paul, but a measured one. Woodley performed mostly as advertised, finding success with a several punches (including one in the fourth which sent Paul stumbling back against the ropes) but the difference between Woodley and a more experienced opponent was evident when he would hit the target with a straight shot and fail to follow up with a hook which might have demanded more answers from Paul.

And this is exactly how Paul’s first fights have been so carefully stage-managed. The risk assessment of Woodley will have shown a fighter whose best days are clearly behind him, as well as a fighter who – while having undoubted power – lacks the ability to piece his tools together into a cohesive unit, allowing Paul to stick and move without being overly-cautious of the type of counter which an experienced boxer would likely generate.

But if Jake Paul’s fans (of which there are millions) were looking for a showing which can back up his lofty ambition of one day challenging the sport’s undoubted pound-for-pound great Canelo Alvarez, that’s not exactly what they saw.

Boxing isn’t a sport in which you can pantomime your way through and while Paul looked the part in some notable exchanges, he is still burdened by the the habits which take more than three years of boxing training to overcome.

His footwork was, on occasion at least, less than impressive, while his gas tank didn’t exactly look to be a strength as he fought eight rounds for the first time in his young career. Woodley, for his part, landed just 11 jabs throughout meaning that Paul could be content with avoiding single shots for most of the fight and was rarely forced to cede any real momentum to his opponent

But when it comes down to it, Jake Paul got everything he wanted out of this fight, with the possible exception of the knockout that he had promised in every piece of promotional material released to support the fight: he legitimately beat a former UFC champion and added a sheen of credibility to his reputation.

Serious questions remain, though. What will happen when Paul faces a legitimate boxer; someone who has trained in the sport for years and has not crammed their training into a two-month window?

What happens when he takes on someone closer to his own size and age?

Logic suggests that Tommy Fury, half-brother of heavyweight champ Tyson who defeated another MMA fighter, Anthony Taylor, on the undercard will be next up for Paul, and this aligns perfectly with Paul’s gradual increase in competition.

Fury’s mixed performance against Taylor in which the promised KO never came shows that he is nowhere near the finished article inside the ring – and another potentially promising trophy in Paul’s developing career.

In a way, this is the mastery of what Jake Paul is doing. Each opponent he has faced has seemed to at least subconsciously underestimate him and Fury’s comments throughout the week suggests the same. But if this is a risk for Jake Paul, it is a calculated one.

One of the most profitable positions in prizefighting is to be a fighter who polarizes opinion into one of two camps –  to see him win or to see him lose.

But both of those sets of people have one thing in common: they will purchase the fight. Jake Paul knows this. Tommy Fury knows this. Showtime knows this.

We learned a lot about Paul in those 24 minutes in the ring on Sunday night. Is he a great fighter? Certainly not – but does that really matter? Jake Paul is a problem that will no doubt one day be solved if he continues to ramp up his opposition. Until then, he is one of the sport’s biggest pay-per-view attractions.

And when it comes down to it, that’s all he really wanted when he first laced up his gloves. 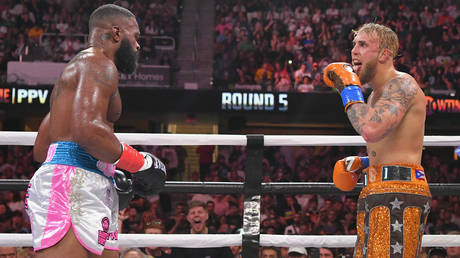 ‘YOU be better’: Mets players pann...