Close
Trending News
HomeSportAbusive coach or winner? Why does figure skating supremo Eteri Tutberidze’s dominance trigger such uproar? Or is it envy?

Abusive coach or winner? Why does figure skating supremo Eteri Tutberidze’s dominance trigger such uproar? Or is it envy?

Abusive coach or winner? Why does figure skating supremo Eteri Tutberidze’s dominance trigger such uproar? Or is it envy?

After Russia’s famed figure-skating specialist Eteri Tutberidze was named best coach by the International Skating Union (ISU), furious fans have voiced fierce criticism and disappointment across the internet. But why?

The Inaugural ISU Skating Awards ceremony was held on July 11, with Tutberidze leapfrogging two other nominees – Rafael Arutyunyan and Brian Orser – for the right to be called the world’s best figure-skating coach.

What seemed to be an unquestionable win, as Tutberidze’s skaters had made a golden sweep this season winning all major events, has caused an uproar on social media, with the most vocal critics accusing the ISU of unfair judging and calling the coach an “abuser.”

She’s given so much strength and dedication to her athletes this season, and now it’s time for this talented coach to take centre stage.

“Congratulations on awarding abusive choaches and promoting unhealthy methods in your sport,” one person wrote.

“Giving little girls 2 seasons of glory while abusing them, then throwing them out and telling them to get pregnant is not a successful coach. Borser didn’t coach his skaters to 6 world titles, 4 Olympic medals (3 of them gold) and 7 GPF titles, just to be shat on,” one more fan added.

Giving little girls 2 seasons of glory while abusing them, then throwing them out and telling them to get pregnant is not a successful coach. Borser didn’t coach his skaters to 6 world titles, 4 Olympic medals (3 of them gold) and 7 GPF titles, just to be shat on.

After emerging on the international stage as one of the most talented women’s coaches, Tutberidze has constantly been an target of fierce criticism. During her six-year dominance in ladies skating she has brought to fame dozens of athletes who have claimed Olympic, world and European titles, constantly replacing one another on top of the podium.

She has guided Yulia Lipnitskaya and Alina Zagitova to Olympic prominence, establishing herself as a strong-willed and unbending pundit who knows the secret of raising true champions.

Having created an “empire” of champions where her skaters haven’t left any competition without winning a medal, Tutberidze has been exposed to criticism from those who apparently don’t want to see any one country dominate women’s skating.

The coach, who has raised bright stars, including two-time world gold medalist Evgenia Medvedeva and world junior champion Alexandra Trusova, has been accused of using cruel methods of training and of pushing the youngsters’ bodies to their limits in pursuit of numerous titles.

Notably, none of the critics have ever attended Tutberidze’s training sessions or tried to talk to her about her ‘cruel’ methods. Moreover, all of her skaters, including those who left her group, have never complained about Tutberize’s ‘cruelty’ and ‘unhealthy training sessions.’

One of the main arguments levelled against the coach is that she can only work with junior skaters, whom she then leaves after they reach puberty. It is true, some of Tutberidze’s stars lost winning positions being replaced by younger teammates with more difficult technical content.

But is it Tutberidze’s fault? Women’s skating has always been young in terms of competitors’ ages. US star Tara Lipinski retired from amateur figure skating after winning the Olympic gold at the age of 15. Oksana Baiul triumphed at the 1994 Games at the age of 16, Sarah Hughes left professional sport at the age of 17, right after claiming gold at the home Games in Salt Lake City. All of them showed excellent performances despite their tender ages, and nobody called their coaches ‘abusers.’

Having a packed bench of technically gifted skaters who conquer new heights through tough competition is not a crime. There will always be winners and losers in sport, champions will be replaced by newcomers who will constantly raise the bar higher.

Tutberidze made a ground-breaking revolution in women’s skating, introducing a quad-jumping generation. Despite facing constant criticism and reproaches, she continues moving forward with progress being her main goal. 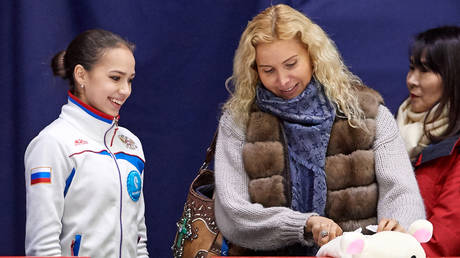