Moroccan heavyweight boxer Youness Baalla paid a shocking tribute to Mike Tyson during his Olympic 2020 match against David Kyika in Tokyo by biting at the New Zealander’s ear yet still managing to avoid disqualification.

Channeling the former ‘Baddest Man on the Planet’ Tyson, who bit a chunk out of the same part of Evander Holyfield’s body during a Las Vegas heavyweight title rematch in 1997, he dug into Nyika’s ear while the referee wasn’t looking.

Nyika complained to the official without success in getting his rival disqualified, but still went on to win 5-0 as Baalaa was eliminated and sent packing.

“I’ve always backed myself and backed the people around me to lift me up,” said Nyika following the incident.

“I know I am capable of great things. I have every intention to be towards the top of that podium.”

Online, footage of the bite began to spread after the final bell, as one outlet remarked that Baalla must have been feeling “peckish” during an incident a commentator described as “an act of absolute madness”.

Must have learnt from the best😬😒 pic.twitter.com/z7d8qvds41

People commenting “Suarez” are really too young to remember… pic.twitter.com/cifIJQgxZH

Who does he think he is. Mike Tyson?

“Wow – must have been watching Tyson and [Luis] Suarez as inspiration recently…,”  quipped one user in reference to not just the Brooklynite brawler, but also the Uruguayan striker who gnawed rival players in both the Premier League and 2014 World Cup.

“Looks like Suarez has turned to boxing,” it was also said.

“He forgot he was in a boxing match [and] thought it was an eating competition.

“Glad he lost the match, he should be frogmarched out of the Olympic Village,” demanded an angry party. 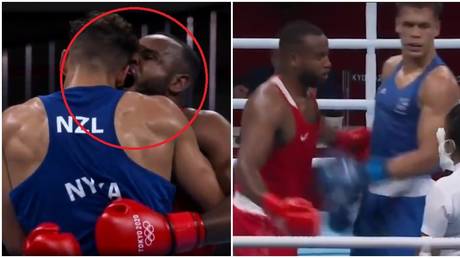