There has been a positive update on the condition of Khabib Nurmagomedov’s father and coach, Abdulmanap, with Russian MMA promoter Kamil Gadzhiev revealing his friend “came to his senses” and “the disease is receding.”

Khabib’s 57-year-old father and noted MMA trainer remains in intensive care in a Moscow hospital after suffering a stroke brought on by a COVID-19 infection.

He had been placed in an induced coma following heart bypass surgery, but was recently reported to have regained consciousness as his condition appears to have improved.

READ MORE: ‘I hold his hand & ask if he recognizes me’: Khabib warns of ‘tough recovery’ for father Abdulmanap after Covid-19 stroke

Khabib provided an update on his father’s status earlier this week as he revealed he was still in serious condition, but the pair were able to communicate on a basic level during Khabib’s daily hospital visits.

But now there has been more positive news, courtesy of Kamil Gadzhiev, president of Russian MMA promotion Fight Nights Global, who posted a message via the promotion’s Instagram page to inform fans that Abdulmanap was on the road to recovery.

“I understand Khabib’s father came to his senses. The disease is receding,” said Gadzhiev.

“From what I understand, Abdulmanap’s health is improving. It’s good news.

“I haven’t heard of him getting up and walking, but he is definitely conscious.

“That’s what I’ve heard from family friends and close relatives. The illness goes away. And that’s a fact.”

The news will come as a welcome boost to Nurmagomedov’s fight team, with former GFC bantamweight champion and nephew of Abdulmanap, Umar Nurmagomedov, set to fly to Abu Dhabi next month to face former Cage Warriors champion Nathaniel Wood in his UFC debut on “Fight Island”.

Meanwhile, UFC lightweight champion Khabib has been throwing himself into his training to distract himself from his father’s plight.

But the emerging news of Abdulmanap’s improving condition may inspire him to even more improvement in the gym as he prepares to face interim champion Justin Gaethje in a lightweight title unification bout later this year. 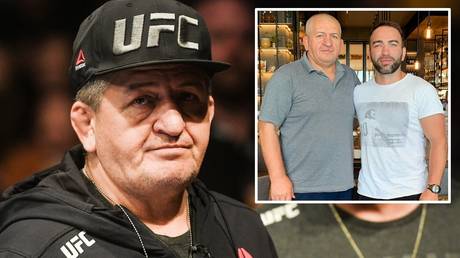 Alexander Povetkin vs. Dillian Why...

On song? Chelsea conductor Tho...