NFL outfit the Washington Football Team, which has faced allegations of sexual harassment including reported claims from former team dancers, has copped a muddled reaction after axing cheerleaders for the first time in 50 seasons.

Petra Pope, the team’s new senior adviser, has revealed that the team will introduce a mixed-gender dance squad for gameday entertainment from now on, with the aim of “honing in” on a “skillset of being super athletic”.

Some of you voted for this. Just own it. Pull those covers up to your chins. Woke and cancel culture… enjoy!

The team faced allegations last year that club employees had created videos of outtakes from calendar shoots when the women involved were not fully addressed, although the franchise denied the existence of videos which the Washington Post said it had seen, and a team attorney and owner Daniel Snyder said the matter “has been resolved.”

“We want to be more inclusive so we are going to invite a coed entity [to audition],” Pope told USA Today Sports.

🤡 let’s take opportunities away from women and give them to men! One coed circus coming up!

“We’re able to do more things with the strength of a male and lifts, so that’s changed a great deal. The inclusivity, strength and interest of choreography has changed.”

The news has not been entirely well met online. While a few backed the idea as progressive and a larger contingent voiced their indifference, the majority seemed bewildered by the move.

I don’t get how this is a bad thing? Look at major productions, movies, stage shows, etc. I’m looking forward to it.

Same! I think it’ll be much more entertaining and less awkward to watch.

“We’re so soft,” said one, while another added: “‘Inclusivity’ gone wrong.

“It’s so hard to be a fan of this team. Ten years ago that would have been crazy for me to say that.”

Critics labeled the team, which changed its name from the Washington Redskins over cultural sensitivities last year, a “woke franchise” and a “coed circus”.

Some observers also felt that removing the existing cheerleaders, who will be able to re-audition, was a curious way to react to concerns some former dancers had raised, although the team emphasized that the move had nothing to do with any allegations or incidents.

Good/don’t care. Not all teams have them anyway and I don’t think they add anything. Neither does a halftime dance show, but I’m busy overpaying for beer and bad food at that time anyway. 🙄

If there’s penile cleavage, I’m out

USA Today Sports said that it had been told by a source that the team reached a settlement with former cheerleaders last year, speaking on condition of anonymity because they were not authorized to publicly disclose confidential terms of the settlement.

Speaking about the calendar, Pope said: “At this point, as we reimagine what this looks like, that’s not in the plans.

lol. “Inclusivity” gone wrong. It’s so hard to be a fan of this team. 10 years ago that would have been crazy for me to say that

“We’re going to move forward to a more modern entity, and that more than likely will not be a part of it.

“Right now we’re thinking modern, modern franchise. A calendar is not a part of that process.” 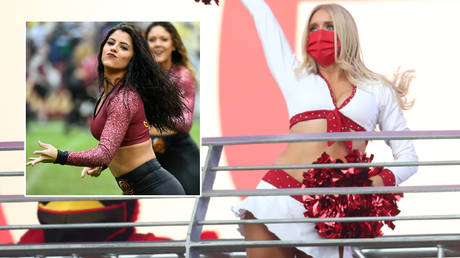