If there was any silver lining for England fans to take from their team’s damp Euro 2020 showing against Scotland at Wembley, it could be that finishing second in Group D would actually make life easier for Gareth Southgate’s men.

England players trudged off to a chorus of boos from their own fans on Friday night after being frustrated by a fired-up Scotland team who more than deserved the point they claimed at the home of the Auld Enemy.

Southgate was forced to defend his players and tactics afterwards, claiming that England’s lack of ambition – and the limited use of attacking talents such as Jack Grealish – was all part of the bigger picture at Euro 2020.

“I understand we’re at Wembley, we wanted to win, but in the context of the tournament qualification is the most important thing,” said Southgate.

After two games played in Group D, England find themselves level with the Czech Republic on four points but behind on goal difference.

Further down the table, Scotland and Croatia have a point apiece.

The last round of group fixtures sees England host the Czechs at Wembley on Tuesday night – the same time Scotland take on Croatia in Glasgow.

There are various permutations at play, but essentially a win for England means they will top the group, while a draw with the Czechs would see them finish second on goal difference.

Should England lose, they should still qualify as one of the best third-placed teams.

Here’s how the Group D table looks after tonight’s draw with Scotland.

Next up: Czech Republic on Tuesday! pic.twitter.com/Pl3NgmU7TF

Such are the vagaries of the Euro 2020 format, a second-placed finish in Group D might actually make life easier for Southgate and England moving forward in the knockout stages.

The winners of the group are handed a tough-looking assignment in the last 16 on June 29 in London against the team which finishes second in Group F.

In contrast, the runners-up in England’s group are handed what looks like more favorable last 16 draw against the second-placed team in Group E – which contains Spain, Sweden, Poland and Slovakia.

That permutation was not lost on some football fans as they suggested Southgate was actually a tactical genius for letting his team play out a dour draw against the Scots.

Draw against the Czechs, second in the group, avoid the Germans, French & Portugal. Southgate’s a football genius… #eng

Maybe, this is Southgate’s way of finishing second in the group and getting easier draws till the semi-finals. pic.twitter.com/ccl2TdtVV3

Gareth Southgate when he realised if we finish second in the group we’re likely to play Slovakia, Sweden or Poland rather than Portugal, France or Germany… #ENG pic.twitter.com/0GLRwsDoOM

England famously benefitted from finishing second in their World Cup group in Russia three years. After losing their final group game to Belgium, the Three Lions met Colombia and Sweden in the last 16 and quarter-final respectively, before falling to Croatia in the semi-final.

Depending on your thinking, Southgate is either a tactical genius or simply a man incapable of utilizing the prodigious young talents at his disposal.

Plenty would say the latter – but is the Three Lions boss simply flexing on all of us? 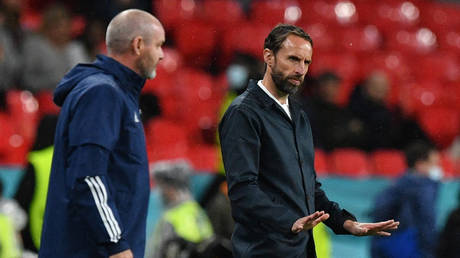 Too little too late: Central banks...