Polish teenager Iga Swiatek stunned no. 1 seed Simona Halep 6-1, 6-2 to reach the quarterfinals of the French Open on Sunday.

The 19-year-old needed little more than an hour to dismantle Halep, a three-time finalist and 2018 champion at Roland Garros.

The match served as the perfect revenge for their meeting at the same stage in Paris last year, which Halep won 6-1, 6-0 in just 45 minutes.

Fans on Twitter were in awe of Swiatek’s impressive showing.

“Best performance of a player in 2020! I’m a super Simo fan but today nothing to do against the perfection in the other side of the net,” lauded one spectator, while another described the performance as a “serious whooping.”

Another fan was delighted at the “amazing intelligent tennis played by Iga with such composure.”

Best performance of a player in 2020! I’m a super Simo fan but today nothing to do against the perfection in the other side of the net

Halep was enjoying a 17-match winning streak, having won each of her last three tournaments –  the Dubai Tennis Championships, Prague Open and Italian Open – after her defeat in the Australian Open semifinal.

The Romanian only made two unforced errors in the first set, but she quickly went down 6-1 as she struggled to deal with Swiatek’s impressive power and booming forehand.

The unseeded Pole, who completed her school graduation exam during lockdown earlier this year, notched 30 winners in the contest and broke Halep four times, having earned 14 opportunities to do so.

Halep was unable to trouble her serve, though; Swiatek did not face a single break point in the match.

Swiatek has made short work of all four opponents she’s faced at Roland Garros this year:

She described her week as a “dream come true.”

“It is my favourite… this week is like a dream come true for me.”@iga_swiatek loves #RolandGarros ♥️ pic.twitter.com/DbRTMwMJ1C

She’ll face Italian qualifier Martina Trevisan, against whom she has a 1-1 head-to-head record, in the quarterfinal.

Her win over Halep also guarantees Ashleigh Barty will retain her status as world no. 1, despite the Australian skipping the US and the French Opens due to coronavirus concerns. 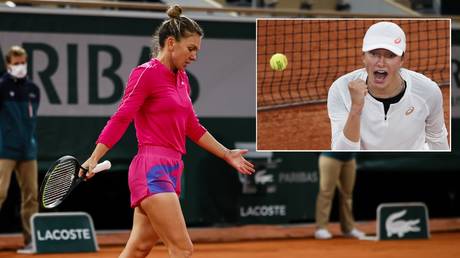