‘A patriot of his people’: Russian UFC title challenger Petr Yan adds to condolences after death of Abdulmanap Nurmagomedov

‘A patriot of his people’: Russian UFC title challenger Petr Yan adds to condolences after death of Abdulmanap Nurmagomedov

UFC bantamweight title challenger Petr Yan has hailed Abdulmanap Nurmagomedov as a “patriot of his people” after the respected father and trainer of lightweight champion Khabib died at the age of 57 on Friday.

Nurmagomedov Sr. died in a Moscow military hospital after a months-long battle with complications arising from a Covid-19 infection, triggering a wave of tributes for a man who raised his son into one of the most dominant forces the world of MMA has seen.

Among those to pay tribute to the Dagestani trainer was Russian bantamweight Yan, who is currently preparing to face Brazilian legend Jose Aldo for the 135lbs title on ‘Fight Island’ in Abu Dhabi on July 11.

“My condolences to his family. A worthy coach and patriot of his people,” Yan wrote as he posted a black-and-white image on Instagram of Khabib alongside his father.

Nurmagomedov Sr had been in a serious condition in a Moscow hospital since being transferred to the Russian capital in May.

Details of his death are still emerging, but he is believed to have suffered heart and brain complications arising from a Covid-19 infection.

He had initially regained consciousness after being placed in a coma, even communicating with those around, including son Khabib, boosting hopes of an eventual recovery.

However, his condition worsened and he is said to had slipped into unconsciousness again in the days leading up to his death.

A family friend told Russian media that doctors had been unable to treat the brain injuries he had suffered as a result of a stroke caused by Covid-19.

Abdulmanap Nurmagomedov will be buried in his home village of Kirovaul in Dagestan, it was announced shortly after his death. 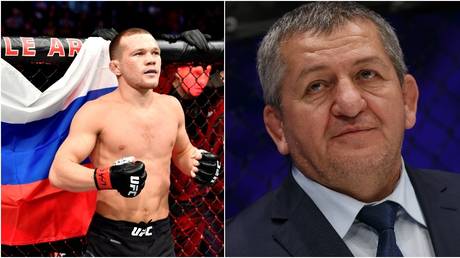