A.J. McKee made light work of Bellator icon Patricio Freire to win the $1 million featherweight Grand Prix, while Khabib Nurmagomedov extended his unbeaten run as a coach on what was a dominant night for Russian MMA in California.

If McKee, 26, had long been thought of as one of the top prospects in all of mixed martial arts, the evidence inside the cage in Inglewood, California late on Saturday night suggests that his metamorphosis from contender to the finished article is complete.

In the culmination of Bellator’s months-long featherweight Grand Prix, McKee took just less than two minutes to overwhelm the promotion’s most storied fighter, Patricio ‘Pitbull’ Freire – first sending him to the canvas with a left high kick and subsequently finishing the fight moments later after he sank in a tight guillotine choke.

It was the first time in Bellator legend Freire’s 37-fight career that he had been finished inside the distance, and hands the promotion’s 145lbs strap – and a check for a cool $1 million – to a fighter who can make a significant claim to being the world’s best featherweight.

“I said I was going to do it in a stylish fashion and it was done in one,” said McKee, now 18-0, afterwards.

“When I rocked him, I thought ‘that’s it’. After the head kick, I hit him with that uppercut and I saw him quit, he didn’t need any more.

“But like the ref says, ‘don’t stop punching until I tell you to’.”

Jesus AJ McKee lol this dude is the truth!

“Jesus, AJ McKee – this dude is the truth,” added UFC middleweight Deron Winn, while former fighter Ben Askren also took to social media to indicate exactly how impressed he was with McKee’s handiwork.

“Wow,” he wrote on Twitter. “Crazy impressive for McKee.“

Elsewhere on an impressive night of fights, Usman Nurmagomedov, cousin of former UFC champion Khabib, continued the fighting legacy of his family name with a first-round TKO of fight veteran Manny Muro.

Nurmagomedov admitted in the lead-in to the fight that he was feeling “a little pressure” as he prepared to fight in front of fans in the United States for the first time in his career – but he needn’t have worried.

The 23-year-old prospect dominated from the first bell and showed off the wrestling credentials one would expect from a fighter bearing his name as he worked for a series of early submissions.

The end, though, came as a result of a shuddering knee delivered to Muro’s midsection which tumbled him to the mat, with referee Frank Trigg calling off the fight after Nurmagomedov launched a flurried assault of hammer-fists.

Elsewhere on what was a very good night for Russian mixed martial arts, Khasan Magomedsharipov, the younger brother of UFC star Zabit, improved to 6-0 with a second-round TKO finish of Jonathan Quiroz, while Islam Mamedov – who trains under Khabib Nurmagomedov – scored the biggest win of his career when he earned a split decision win against former Bellator lightweight champion Brent Primus.

Another of Khabib’s proteges, Gadzhi Rabadanov, was also victorious after he knocked out Daniel Carey with a sublime left hand which he followed with a series of shots on the ground.

The Khabib protege is certainly a fighter to watch after tonight… #Bellator263 #MMA pic.twitter.com/NglFHgBn9f

Khabib Nurmagomedov was 3-0 as a coach tonight at #Bellator263. Coach of the Year candidate in 2021, for sure.

Carey remained prone on the mat for some time after the finish, with Khabib subsequently assisting cageside doctors in loading the injured fighter onto a stretcher after a neck brace was applied.

Indeed, Khabib’s fighters went a perfect 3-0 on the card as Russian MMA continues to make its presence felt in the Bellator ranks, meaning that Nurmagomedov’s post-fight career as a coach has got off to the best possible start, with his fighters going a perfect 7-0 under his leadership so far in 2021.

Even if we have seen the last of ‘The Eagle’ inside the cage, his influence is still very much being felt in the continuing Russian takeover of Bellator’s ranks. 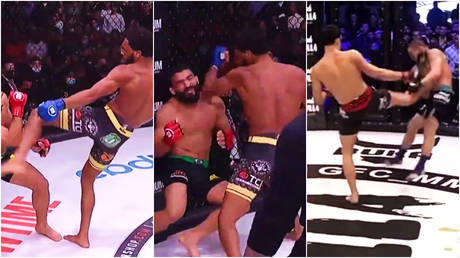 Is America’s oil industry too big...