Serbia’s Viktor Troicki has reportedly become the third player from the controversial Adria Tour to test positive for Covid-19, as organizers including world number one Novak Djokovic face mounting criticism for holding the event.

Troicki, who appeared in the Belgrade leg of the inaugural tour before it moved on to Zadar in Croatia, has confirmed to local media that both he and his heavily pregnant wife have tested positive for Covid-19, according to reports.

Djokovic himself is said to have taken a Covid-19 test on returning to Serbia from Croatia and is awaiting the results, while Alexander Zverev, Marin Cilic and Andrey Rublev – who all competed on the tour – have said they have tested negative for the deadly disease.

Following the news of Dimitrov’s test, the Adria Tour final between Djokovic and Rublev was scrapped on Sunday despite organizers asserting they had “at all times strictly followed the epidemiological measures in place with the countries where the Adria Tour was organized.“

However, that has not quelled the anger over the event, which saw fans pack the stands in Belgrade and Zadar, and where players and fans mingled freely.

After the first leg in Serbia, players were seen celebrating shirtless in a nightclub in scenes described as “tone deaf” by some on social media.

Australian men’s star Nick Kyrgios has branded the tour “bone-headed,” while on Monday British number one Dan Evans said Djokovic “should feel some responsibility in his event and how it’s transpired.”

🤦🏽‍♂️🤦🏽‍♂️🤦🏽‍♂️ Boneheaded decision to go ahead with the ‘exhibition’ speedy recovery fellas, but that’s what happens when you disregard all protocols. This IS NOT A JOKE. https://t.co/SUdxfijkbK

Bruno Soares, a Brazilian doubles specialist who is on the ATP Player Council, where Djokovic is president, described the event as a  “horror show” as he hit out at organizers. 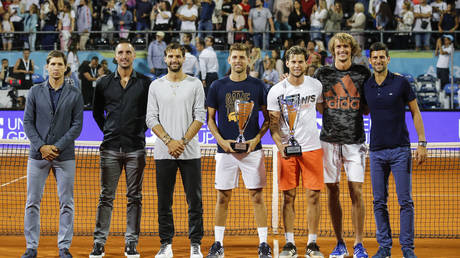