Commentators and fans have reacted with outrage after a plane carrying the message “White Lives Matter Burnley” was seen flying over Manchester City’s Etihad Stadium during the build-up to their Premier League match with Burnley.

Stunned fans saw the message, which was made in Burnley’s claret and blue colors, being pulled across the sky in massive lettering by a plane ahead of kick-off in the Monday evening clash between the reigning champions and their Lancashire neighbours.

The words soared over City’s home as players including Raheem Sterling, the England striker who has been applauded for speaking out against racism, took a knee on the turf in symbolic support of the Black Lives Matter movement which has been particularly prominent since the death of George Floyd at the hands of police brutality in the US last month.

One of the few journalists allowed into the stadium during the pandemic, City writer Sam Lee, called the incident an “absolute disgrace,” adding: “F*cking hell – what an absolute embarrassment.”

not sure if I should be giving this publicity actually, but I don’t think we should turn a blind eye to this overt racism

“Not sure if I should be giving this publicity actually, but I don’t think we should turn a blind eye to this overt racism.”

A City fan on Twitter posted a photo of the plane and claimed that the display of the advert had been organized by a company that had also promoted its part in a banner campaigning against British Airways’ treatment of staff during the pandemic, flown over Goodison Park before the Merseyside derby between Everton and Liverpool the previous day, and numerous other aerial football messages.

That plane trailing a banner that says ‘White Lives Matter Burnley!’ apparently did a dummy run over the Etihad yesterday. Morons

City cruised to a 3-0 half-time lead through an early strike by England starlet Phil Foden and two goals by Riyad Mahrez for the second-placed hosts.

Speaking after City beat Arsenal by the same scoreline at home last week, when all Premier League players wore ‘Black Lives Matter’ on the back of their shirts for the first time as part of an initiative that will continue until the end of the season, Guardiola said: “White people should apologize for the way we treated black people in the last 400 years.

“I feel ashamed for what we have done for black people around the world – not just America, the problem is everywhere.”

“Just because you are born a different colour of skin, how do people think they are different to the other one?” 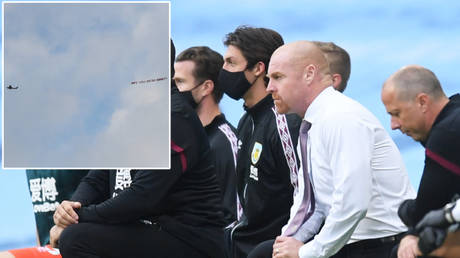